Research on the role of positive interactions in ecology has been increasing rapidly in the last 15 years or so. An example of this is the study of mutualistic networks, which are among the most exciting and fast-moving areas of ecology. In the 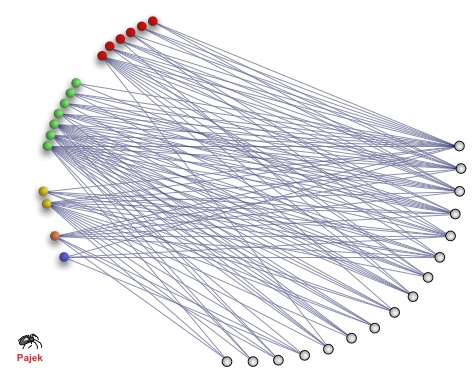 last few years a number of really amazing papers have shown that studying these networks can really increase our understanding of natural systems. In a recent review papers in Frontiers in Ecology and the Environment Jordi Bascompte describes briefly but thoroughly the history and current state of this field of research. Starting with observations by Charles Darwin, he describes the importance of positive interaction and how during many decades research had been focused on single plants or pollinator, or highly coevolved interactions which has produced fundamental information. However, now with this network approach a lot can be learn about their stability and effects of species extinctions, among many other aspects. A very interesting comparison that is made is with the Internet. Apparently, a lot has been learn from this human made network, where studies have shown that networks are more stable and resistant to random attacks if they are heterogeneous (some part of the network being much more connected than most) that if they are homogeneous (all nodes being equally important / connected). The internet is actually a heterogeneous network, and so are th

e mutualistic networks. Bascompte also mentions the role of non-reductionist approach to science in the study of this highly complex networks since studying the parts of the network doesn’t allow researches to fully understand its behavior (e.g. you can know a lot about pairs of interactive species, but it has been proven that it will not tell you about the stability of the network to say, the extinction of same of its members). Also, he highlights the role of multidisciplinary approaches to complex problems, since the study of mutualistic networks has relayed heavily on research from other areas of science.
Jordi Bascompte (2009). Mutualistic networks Frontiers in Ecology and the Environment DOI: 10.1890/080026
Posted by Martin Nuñez at 1/19/2009 11:37:00 AM

This is applicable to my study of restoration ecology in that I'm trying to justify a holistic approach to studying the environment and monitoring restoration treatments, including those components we don't readily see (i.e., the mycorrhizae I study). This will be a good paper to check out to strengthen my argument. Thanks again for sharing.

Hi Anjel,
I think you are correct. If you had base line network metrics (e.g.,
connectedness) from intact communities you can evaluate restoration
success as network interactions form during restoration. Seems like a good
paper idea!
Marc