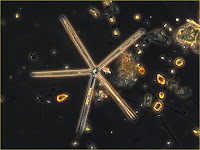 After attending the presentation by Elena Litchman at the ASLO Aquatic Science Meeting in Nice three weeks ago I came across this paper. Although it was published already two years ago, this works need to be highlighted! Marine phytoplankton is important. It contributes approximately 50% to world primary productivity. Among other factors phytoplankton communities are structured by competition for limiting nutrients (mainly for nitrate and ammonia) in the ocean. Litchman et al. base their paper on the presumption that phytoplankton organisms can achieve higher competitive ability (Tilman’s R*) by different strategies. That is, the organisms can either increase their maximum nutrient uptake and/or growth rate or they decrease the minimum cell quota, the half saturation constant for nutrient uptake and/or their mortality. Litchman et al. tested if they can find constraints and trade-offs on the evolution of better competitive abilities (lower R*) in major phytoplankton groups. Specifically they asked if there is a positive relationship between maximum growth rate and R* which would show a gleaner-opportunist trade-off.
The authors show positive relationships between measurements for growth and nitrate uptake which can constrain the evolution on competitive ability. Indeed major groups of phytoplankton group along these trade-off curves. Whereas coccolithophores e.g. show low nitrate uptake rates and low half-saturation constants, diatoms and dinoflagelates show the opposite nitrate uptake strategy with high uptake rates and high half-saturation constants. A gleaner-opportunist trade-off, i.e. a positive correlation between maximum growth rates and R*which would result in a super species, could not be found across major groups but within the diatoms. The paper gives more results about trait differences among taxonomic groups and allometric scaling relationships. Trade-offs and different strategies in nutrient uptake are discussed in a very concise way either from a mechanistic physiological view as well as from the evolutionary history perspective.

Dear colleagues, I really enjoyed Litchman's paper on trade off in phytoplankton. I do not understand clearly why the positive trade off between R* and maximum growth rate (MGR) create a “superspecies”. As it was defined, I assume the lowest R*, the better competitive ability a species has. That is, it can reduce the resource to lowest levels, so exclude other species with higher requirements. When considering MGR, a species with higher growth rate, could out-compete others in resource full conditions based on its velocity to grow. I'll expect a high MGR species to have a HIGH R* (Low competitive ability) and the inverse. That will result in a positive slope, which is true in the formula showed in Litchman figure 1d, but not in the scatter plot and fitted curve. I dont kwon what is my mistake in this interpretation, if someone could clarify me, will be welcomed.
Regards
Angel
Uruguay