Predicting the effects of global warming on biological systems is of critical importance for informing proactive policy decisions. Most research so far has been on trying to predict shifts in species distributions and changes in interactions within local habitats. But what many of these studies assume is that the basic biological processes and requirements of the individual species will not change -that is their biology is fixed and they simply need to find the place that best suits them. Not so, say Mary O'Connor and colleagues, in a just-released study in PLoS Biology.

What this research means is that global warming may alter food web interactions by increasing resource needs of organisms as their metabolic rates increase. This may increase the stress on communities and change diversity patterns as increased needs may shift competitive hierarchies or affect autotroph's ability to withstand consumer effects.

Everything but extinct: invasion impacts on native diversity 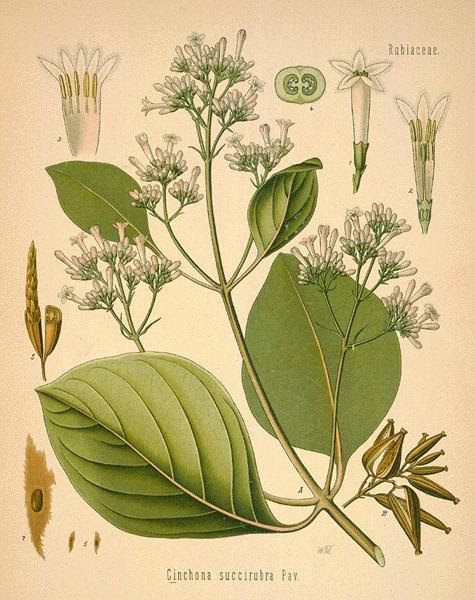 In a forthcoming paper from Heinke Jäger and colleagues in the Journal of Ecology, Cinchona pubescens invasions on the Galápagos Islands were monitored in long-term plots for more than seven years. What they found was that there was a four-fold increase in Cinchona density as the invasion progressed and that this increase had measurable effects on native species abundance. While they did not observe any native extirpations in their plots, native densities decreased by at least 50%. Of the greatest concern was that Island endemics appear to the most susceptible to this invasion.

What these results show is that, while there were not any observed extinctions, there were serious deleterious changes to native diversity. Further, the native species, and especially the endemics, are now more susceptible to other invasions or disturbances due to their lower abundances. The impact of exotic invaders may not be readily apparent but may be a major contributor to increased extinction risk.

It was a day full of talks, and I really enjoyed being able to spend the whole day just absorbing the presentations. Here are some highlights from today's events:


Also, there was the annual general meeting, which was rather somber as three obituaries were read aloud. The three deceased, John Harper, Bob Jefferies and Simon Thirgood, were all superb ecologists who absences were obviously felt. Harper (my Master's advisor's advisor) and Jefferies (my colleague at Toronto) were both eminent ecologists with long and distinguished careers, while Thirgood (a fellow Senior Editor at the Journal of Applied Ecology) was in the prime of his very successful career.
Posted by Unknown at 9/09/2009 05:59:00 PM No comments: Links to this post

This year's Tansley Lecture at the BES meeting was a superb presentation given by Ian Baldwin from the Max Planck Institute for Chemical Ecology. He was enjoyable to watch as his folksy, mid-western American style disarmed the listener and leaving them unprepared for his ascorbic wit and, at times, controversial message. Prof. Baldwin* is a chemical ecologist who studies plant biochemical and physiological processes and their interaction with herbivores. Through his use of molecular tools and superb natural history, he has gained new insights into how and why plants respond to herbivory. He has discovered the pathways allowing wild tobacco, Nicotiana attenuata, to detect chemicals in tobacco hornworm spit and the resulting chemical defense response. More than this though, part of his talk was about the use of transformed plants to study this plant defense response. Using genetic tools, his group was able to knockout certain segments of these biochemical pathways in order to determine how various chemicals affected hornworms. He showed chemical responses involved signaling hornworm predators whereas other responses directly targeted wornworm's ability to digest plant material.

I think that ecologists are often wary of GMOs and his talk was a convincing case for their use in basic research, and he advocated for a more reasoned approach to their use. 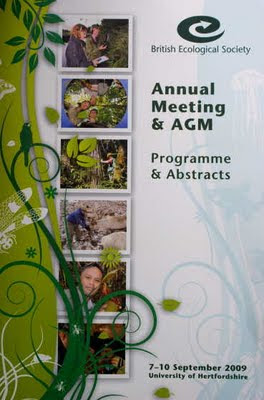 I'm in Hatfield, outside of London, for the British Ecological Society (BES) meeting, and I'll be blogging thoughts, happenings, etc. I posted several observations from the American equivalent (ESA) last month, and one thing is readily apparent, even though talks do not start until tomorrow. While the ESA meeting is a great chance to meet a lot of people and see a lot of talks, at a few thousand conference goers, it can be a bit overwhelming. At any given time the ESA meeting had up to 26 concurrent sessions, which makes for a lot of running around if there are talks you want to see in different sessions. At the BES there is a maximum of 7 concurrent session. The BES is definitely smaller than ESA and the meeting and venue feel compact and intimate. I'm looking forward to experiencing the BES meeting this week.

After a horrendous year of canceled job searches and a barren landscape lacking many opportunities for academic-track job seekers, the jobs posted this season seem to be a stark contrast. In a previous post, I blogged about the best ecology job wiki, and when you look through last year's job postings you notice that the 'updates' column contains a multitude that had their searches canceled. Most people assumed that there wouldn't be very many tier-one academic jobs this year, but looking at the list of jobs announced so far this year, things look pretty good! I've also caught wind of a few other positions at good institutions that have not yet advertised. Job seekers keep your eyes open, and definitely check the job wiki regularly. This could be your year!

I for one have been (overly) optimistic and really didn't buy the hype that the job market would crash this year and for the foreseeable future. I think that many institutions over-reacted to the recession. Of course some states, like California, are in absolute dire straights. But my feeling is that over the next couple of years many institutions will try to recover from their self-imposed professor deficits, meaning that many similar-sounding job searches will be active at the same time. The net result is that schools will be competing against one another for good researchers.
Posted by Unknown at 9/02/2009 10:46:00 PM 11 comments: Links to this post