Some of the earliest ecologists, like Eugen Warming and Christen Raunkiaer, were enthralled with the minutia of the differences in plant life forms and how these differences determined where plants lived. They realized that differences in plant growth forms corresponded to how different plants made their way in the world. Since this early era, understanding the mechanisms of plant competition is one of the most widely-studied aspects of ecology. This is such an important aspect of ecology because understanding plant coexistence allows us to understand what controls productivity in the basal trophic level for most terrestrial food webs. There are a plethora of plausible mechanisms for how plants are able to coexist, and most involve above-ground partitioning strategies (such as different leaf shapes) or phenological differences (such as germination or bolting timing). Yet, below-ground interactions among plants as a way to understand competition and coexistence have been making a strong resurgence in the literature lately. This resurgence has been driven by new hypotheses and technologies. 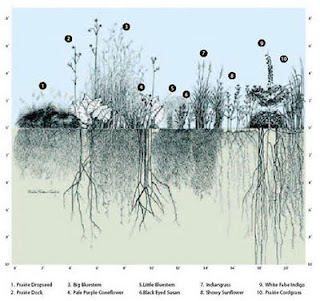 In what is probably the best hypothesis test of the role for below-ground niche partitioning, Mathew Dornbush and Brian Wilsey reveal how soil depth can affect coexistence. They seeded 36 tallgrass prairie species into plot that were either shallow, medium or deep soiled, and asked if species richness and diversity were affected after 3 years. They found that species richness significantly increased with increased soil depth, revealing that deeper soils likely had greater niche opportunities for species. Not only did deeper soils harbor greater richness, but compositions were non-random subsets. The species inhabiting shallow soils were a subset of medium soils, and medium a subset of deep. This means that increasing depth opened new niche opportunities, unique from the ones for shallow soils.

This study is the first field-based experiment of soil depth and coexistence, that I know of and the results are compelling. Plant species are segregating below-ground niches, and perhaps we look for other partitioning strategies for species that inhabit the same soil depth.