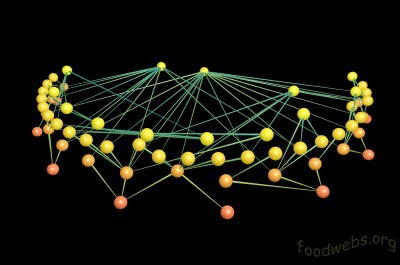 Food webs are notoriously complex, and a difficult aspect of ecology is to offer a priori model-derived predictions of food web processes. There are some ecologists, such Neo Martinez and Jordi Bascompte, who have advanced our understanding of the general mechanisms of food web properties and dynamics through tools such as network theory. Such advanced approaches rely on direct interactions among species, or at least indirect interactions that are mediated through changes in abundance of different network players. However, what is missing from our general understanding of food web interactions is the role that behavioral responses can affect patterns of consumption and network connectivity.

Washington State University ecologists, Renée Prasad and William Snyder convincingly show how behavioral responses to predation can fundamentally alter food web interactions and link previously independent predator-prey interactions. They used two spatially independent insect predator-prey links in a novel, factorially-designed experiment. The two food chains consisted of a ground-based one, where ground beetles consume fly eggs and a plant-based one, where green peach aphids feed on the plants and are consumed by lady beetles. Under the ground-based chain only, the ground-based chain plus aphids, or ground-based chain plus lady beetles, the ground beetles consume a high proportion of the fly eggs. However, when both aphids and lady beetles are present, aphids respond to lady beetles

by dropping off the plants and the ground beetles switch from consuming fly eggs to aphids. Under this last treatment, very few fly eggs are consumed, fundamentally altering the strength of the linkages in the two food chains and connecting them together.

This research highlights the inherent complexity in trying to understand multispecies systems, where the actors potentially have behavioral responses to other species, changing the nature of interactions. These types of responses may also generally increase the connectedness of such networks, which may result in more stable food webs, but this would need to be empirically tested. Regardless, this type of experiment offers food-for-thought to scientists trying to work general processes into a broad understanding of food web dynamics.

The whole world is diverting and we are going through a process of changing effects of our foods.