Biodiversity and ecosystem functioning - only with fungi

Once again scientists have come to an age-old conclusion: fungus is behind all of life’s great mysteries. It's responsible for curing strep throat, delicious veggie burgers, that unique musk emanating from your gym bag, the colour-morphing walls at last night’s party and now, biodiversity and ecosystem functioning.

The world of biodiversity and ecosystem functioning (BEF), like many other high-profile disciplines of science, has often been bogged down by controversy. In such situations, we often spend a disproportionate amount of time focusing on the controversy instead of actually advancing the science itself (sound familiar?) 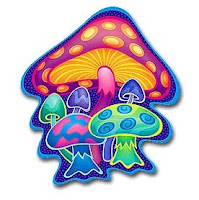 There have been several posts about BEF on this blog in the last few months, but briefly and oversimplified, here's how it works. Ecosystem functions are things like productivity, nutrient cycling and decomposition. Ecosystems that contain many species produce higher levels of these functions than monocultures do. The controversy here surrounds the cause of this phenomenon. In the 1990s, researchers originally disagreed over whether the relationship they observed was due to complementarity (different species partitioning resources) or selection effects (the higher chance of a really productive species being included in a community with many species). The question was largely settled a few years ago; selection effects do exist, but most of the relationship is driven by complementarity. Nonetheless, many biologists who are only tangentially familiar with this area of research are unaware of the consensus and continue to believe that the issue remains unresolved. Some still dismiss the whole field of BEF because of selection effects. I guess people just love a controversy.

The result of all this is that the ecologists studying these relationships have had to spend an undue amount of time parsing their results into selection and complementarity and discussing the two phenomena. They have even come to refer to these as the “mechanisms” behind BEF. And this is where we start to have a problem. Selection and complementarity are not mechanisms - they are symptoms of mechanisms. They do not tell us what is actually causing the positive effect that biodiversity has on ecosystem functioning, only what the shape of the relationship is. In fact, very few studies have actually looked for true mechanisms that explain the effects that we have repeatedly observed.

But this week I read a new paper in Ecology Letters that actually did find a mechanism, and it wasn’t one that we expected. John Maron and his coauthors at the universities of Montana and British Columbia found that belowground fungi were causing plant productivity to increase with diversity.

In an impressively complete experiment, Maron et al. put together a classic BEF setup of many plots containing varying levels of plant diversity and then measured plant biomass. But this time they added a twist; they applied fungicide to the soil in some of these plots. The result was that in the absence of fungi, the common BEF relationship disappeared. The low diversity plots became much more productive, while productivity at high diversity only increased slightly. The authors explained their results by the fact that fungi can be both species-specific and density-dependent, so as plant diversity increases, the fungi’s negative impact on plant productivity diminishes. And for good measure, they of course also ruled out a significant selection effect in their results.

So what does this all mean? Well for one thing, it means that we now have at least one good mechanistic explanation for that black box that we’ve been calling “complementarity” for years. But perhaps more importantly, it means that the link between biodiversity and ecosystem functioning is now more real than ever. If plant species go extinct, the remaining ones will be more susceptible to fungal pathogens and productivity will decline. So let’s try to not let that happen, k?

The effects of forest fragmentation after 30 years

Large-scale alteration of nature landscapes has had profound implications for biological diversity. The single biggest contributor to the current extinction crisis is the wholesale destruction of habitats. As habitats are destroyed, formerly contiguous landscapes become fragmented into smaller patches. But what exactly the effects of fragmentation are, independent of habitat destruction, is not always so clear (e.g., Simberloff 2000. What do we really know about fragmentation? Texas Journal of Science 52: S5-S22).

The biological dynamics of forest fragments project (BDFFP) in the Amazon, was started in 1979 and created 11 tropical forest patches ranging from 1 to 100 ha in size. The dynamics of these fragments have been consistently monitored and compared to plots in intact forest. This experiment represents the world's largest, longest-running fragmentation experiment and has told us more about fragmentation then any other study system. In a recent publication by William Laurance and many colleagues involved in this project, they summarize 30 years of data and show how fragmentation affects ecological patterns and processes. Fragments turn out to be very dynamic and defined by change, compared to interior plots. They have higher tree mortality and are much more susceptible to weather events such as storms or droughts. The effects are especially pronounced at the edges of these fragments. The edge community face high mortality but also have higher tree density. Faunal communities in fragments and especially near edges are depauperate.

One interesting aspect highlighted by this 30 years of research is that the edge effects are strongly influenced by what is happening around the fragments. The fragment edge effects are sensitive to the composition of the inter-patch matrix, giving managers the opportunity to influence fragment diversity and health by managing the matrix in ways that support fragments. Because of over 30 years of perseverance of the researchers involved, this experiment give scientists, managers and policy-makers information to help manage an increasingly fragmented world and to find ways to reduce to negative impacts of habitat destruction.

The 29th installment of Carnival of Evolution is here, hosted by Byte Size Biology. Check out recent evolutionary musings and rants from around the blogoshpere.
Posted by Unknown at 11/03/2010 03:49:00 PM No comments: Links to this post