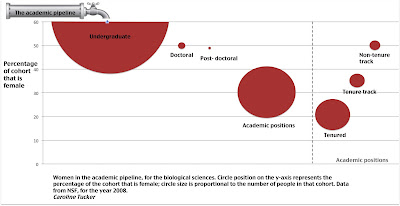 I wrote a long diatribe about author, but I deleted it and instead wish that he would think about and answer some questions of my own.

I ask the author: What does equity and equality look like to you? What does SYSTEMIC discrimination mean to you? What "privileges", or ways that you have been advantaged or empowered, have you realized you have that others don't (white, male, straight, non-physically disabled, U.S. citizen, etc.)? Answering these questions will enlighten you to better understand what you claim to not know and the idea of social justice, should you be open to the idea.

I write as a male biologist who reads EEB & Flow regularly (RSS feed).

I like the fact that,as evidenced by the PNAS article, empiricism can drive or refine our understanding of where systematic barriers arise. Hopefully, actions attempting to deal with realized gender inequalities use this type of evidence, or else we may end with more well-intentioned, but ultimately misguided strategies.

As for the comment above (which is actually a diatribe), I'm not sure what the point is of those types of comments. Ad hominem pigeon-holes do little to understand the current gender patterns in academia. Also, I think that this comment exemplifies part of the problem, namely, marginalizing the voice of a person because of perceived gender, racial and nationality classes. Dealing with inequality, especially as complex as this, requires the engagement of all participants.

I thought the PNAS paper's conclusions were fairly positive. The authors didn't find strong evidence that women received less grant money, or had to work harder to achieve the same job status and career status as men. However, what was apparent is that some of the barriers women face are a function of how society, rather than academia in particular, is structured.
One fact of being female is that reproduction creates a unique demand on your time - women are fertile for a short period of time, during which in academia, you're likely a busy, poorly paid student, or at early, time-demanding career stages. The result is that women who want to have children may choose more flexible positions, which may pay less or offer fewer opportunities for advancement or research. This isn’t unique to academia, and reflects the fact that society in general still doesn’t provide enough support for women who wish to reproduce and have the career of their choice. I was discussing the current data on the proportion of women in academia with my mother, and she was surprised to hear about the pressures that women in academia may struggle with in relationship to having children and achieving "success" in their chosen field. The conversation that evolved - about whether men are actually more gifted in math and other science-related skills, whether women have a greater natural propensity for nurturing than men - reminded me that deep in its core, society is still structured around the assumption of women as gifted in the home sphere, and men in the professional sphere.
Until society has changed enough that men and women alike can succeed at home and in the workplace, I think it's important to catalog past inequities, current improvements, and take stock of what remains to be fixed.

I would like to see more studies that measure the effect of remedies such as women-only scholarships and awards, mentorship programs for school-aged girls, and grants aimed at increasing female participation in science at every level.

It seems like a number of these solutions have popped up in recent years in response to the leaky pipeline. Instead of focusing on documenting the pipeline and finding increasingly sophisticated methods to control for/eliminate confounds, why not deal with the decade or more of 'solutions' and measure their effects?

These studies may be out there, this is a genuine question to the bloggers and not just Friday afternoon grumbling...

@above comment:
Agreed. Also, the paper was fairly America-centric; and the US had probably the worst maternity support compared to many other western countries (here in Canada, parental leave is about a year and can be split between both parents). It would be interesting to see comparisons between countries to see if robust social programs make a difference, or if the pressures on women are beyond simple one-year programs.