We are now through a great first day at the ESA Austin meeting, and have been having a great time both at talks and out on the town in Austin (see photos). Looking over the program, it was obvious that the day had too many good talks, and that it was impossible to see them all. Considering that I was giving a talk, I decided to spend my entire time in my session on biodiversity and ecosystem function. It may seem lazy, but there were a bunch of talks that sounded great. Here are short summaries of all the talks in the session (excluding mine of course). 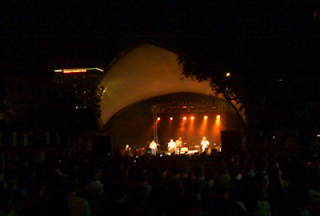 The Decemberists playing at Stubbs. Fantastic show (maybe the highlight of day 1, if not for the many interesting talks) 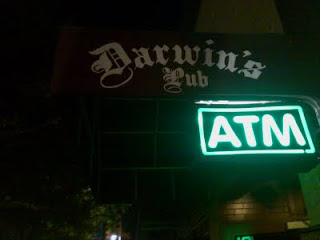 The first talk by Nicolas Mouquet was probably the best. It was on the relationship between species diversity and ecosystem function, asking how we can move from the question of how many species to which species. The ultimate answer, according Mouquet, comes from evolution. By understanding the evolution of specialization, one can discern the importance of niche complementarity in the additive contributions to ecosystem function. Using simulations, he showed that the relationship between richness and function is dependent on whether species are specialist or generalist and the strength of tradeoffs in resource use. He then told us about fantastic experiments that evolve bacteria on differing resources, creating specialists and generalists. Positive diversity-function relationships were higher but not stronger in assemblages of generalists, because they deal with heterogeneity better. He manipulated the amount of evolutionary history in assemblages and found that the relationship between evolutionary diversity and function was stronger with groups of specialists. This research goes beyond most others in that it explicitly links coexistence to ecosystem function.

Greg Crutsinger, showed how genotypic and phenotypic differences in coyote shrub morphs resulted in differences in arthropod abundance and richness, and changes in litter communities.

J. Mclaren manipulated the functional group richness in desert and arctic plant communities and examine the community and functional responses. There was some compensation by other functional groups, but only a weak overall affect on function.

J. Petermann manipulated basal resource diversity and predator richness in bromeliad aquatic communities. She measured four functions and found only weak effects, it seems as though bromeliad leaf complexity may drive some of these relationships.

E. Harvey showed how multiple extinctions in complex food webs can have important cascading effects on ecosystem function. He measured multiple functions in freshwater and marine communities, and that different extinctions had differential effects and some where non-linear.

JJ Weis gave a very interesting talk where he used a model to assess how intra- and interspecific diversity affect function. He found that high complementarity resulted when species had high genotypic variation but low genotypic breadth.

Finally, T. Hanley, who is also a student in the same lab as JJ Weis, examined how intraspecific variation affected population dynamics of daphnia and their algal prey. There wasn’t any effect of daphnia genotypes on algal or daphnia dynamics, but daphnia genotypic diversity increased through time.

What is interesting about this group of talks is the diversity of organisms, systems, scales and functions being considered. These talks are a great signal that biodiversity-ecosystem function research transcend locales and is now a broad, mature field of study.