When it comes to explaining species diversity, Stefano Allesina differs from the traditional approach. Community ecology has long focused on the role of two species interactions in determining coexistence (Lotka-Volterra models, etc), particularly in theory. The question then is whether two species interactions are representative of the interactions that are maintaining the millions of species in the world, and Allesina strongly feels that they are not.

In the paper “Stability criteria for complex ecosystems”, Stephano Allesina and Si Tang revisit and expand on an idea proposed by Robert May in 1972. In his paper “Will a large complex system be stable?” Robert May showed analytically that the probability a large system of interacting species is stable – i.e. will return to equilibrium following perturbation – is a function of the number of species and their average interactions strength. Systems with many species are more likely to be stable when the interactions among species are weak.

May’s paper was necessarily limited by the available mathematics of the time. His approach examined a large community matrix, with a large number of interacting species. The sign and strength of the interactions among species were chosen at random. Stability then could be assessed based on the sign of the eigenvalues of the matrix – if the eigenvalues of the matrix are all negative the system is likely to be stable. Solving for the distribution of the eigenvalues of such a large system relied on the semi-circle law for random matrices, and looking at more realistic matrices, such as those representing predator-prey, mutualistic, or competitive interactions, was not possible in 1972. However, more modern theorems for the distribution of eigenvalues from large matrices allowed Allesina and Tang to reevaluate May’s conclusions and expand them to examine how specific types of interactions affect the stability of complex systems.

Allesina and Tang examined matrices where the interactions among species (sign and strength) were randomly selected, similar to those May analyzed. They also looked at more realistic community matrices, for example matrices in which pairs of species have opposite-signed interactions (+ & -) representing predator prey systems (since the effect of a prey species is positive on its predator, but that predator has a negative effect on its prey). A matrix could also contain pairs of species with interactions of the same sign, creating a system with both competition (- & -) and mutualism (+ & +). When these different types of matrices were analyzed for stability, Allesina and Tang found that there was a hierarchy in which mixed competition/mutualism matrices were the least likely to be stable, random matrices (similar to those May used) are intermediate, and predator–prey matrices were the most likely to be stable (figure below). 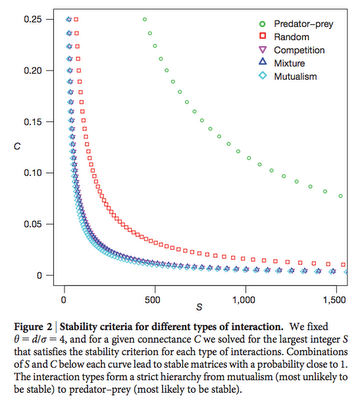 When the authors looked at more realistic situations where the mean interaction strength for the matrix wasn’t zero (e.g. so a system could have all competitive or all mutualistic interactions), they found such systems were much less likely to be stable. Similarly, realistic structures based on accepted food web models (cascade or niche type) also resulted in less stable systems.

Approaching diversity and coexistence from the idea of large systems and many weak interactions  flies in the face of how much community ecology is practiced today. For that reason, it wouldn't be surprising if this paper has little influence. Allesina suggests that focusing on two species interactions is ultimately misleading, since if species experience a wide range of interactions that vary in strength and direction, sampling only a single interaction will likely misrepresent the overall distribution of interactions. Even when researchers do carry out experiments with multiple species, finding a result of very weak interactions between species is often interpreted as a failure to elucidate the processes maintaining diversity in the system. That said, Allesina’s work (which is worth reading, few people explain complex ideas so clearly) doesn’t necessarily make itself amenable to being tested or applied to concrete questions. Still, there’s unexplored space between traditional, two-species interactions and systems of weak interactions among many species, and exploring this space could be very fruitful.
Posted by Caroline Tucker at 4/17/2012 04:12:00 PM 9 comments: Links to this post


A good scientific debate makes for excellent spectator sport (although it’s probably less fun for the participants). Many of the best ecological debates are now classics of the literature—Diamond vs. Simerberloff, Lawton vs. Simberloff, Hubbell vs. many—and these historical debates influence present day ecology. Interestingly, debates in ecology seem to revolve around two particular issues: whether the data is appropriate and whether the methods are adequate to draw conclusions about a particular process.

As an example, there’s a typical ecological debate occurring in Science over Kraft et al.’s “Disentangling the drivers of β-diversity along latitudinal and elevational gradients”. In this paper, the authors reevaluate the mechanisms that drive changes in species identity along latitudinal and elevation gradients using a null model. Although β-diversity may vary along biogeographical gradients as a result of processes such as dispersal limitation, range size, and habitat filtering, total (γ) diversity also varies along these gradients (we know that richness is generally higher in the tropics and the lowlands). Since this suggests that γ- and β-diversity aren’t independent, it may be that changes in γ-diversity need to be accounted for as an explanation for changes in β-diversity (Chase 2011). When Kraft et al. controlled for γ-diversity using a null model, they found that the magnitude of β-diversity did not vary along latitudinal or elevational gradients. They stated that this means: “there may be no need to invoke differences in the mechanisms of community assembly in temperate versus tropical systems to explain these global-scale patterns of β-diversity.”

This conclusion is in contrast to multiple papers that have suggested that tropical communities are somehow structured differently from temperate communities. Such work has been far from conclusive, however, finding evidence for everything from stochastic assembly to microhabitat-driven assembly in tropical regions. However, given the strong conclusion from the Kraft et al. paper, it’s not surprising that there were several responses from other researchers of β-diversity (Tuomisto and Ruokolainen and Qian et al.). It’s also not surprising that the points raised in these responses are fairly typical for debates in community ecology, calling into question the suitability of the data, the appropriateness of the spatial scale for capturing the processes of interest, and the question of whether the methods are correct. The debate is as much about the fundamental questions of how we define and measure β-diversity as it is about the particulars of the Kraft et al. article.

For example, both Tuomisto and Ruokolainen and Qian et al. questioned the sampling design of the data, as to whether there was too much within-plot variation (Tuomisto and Ruokolainen) or, alternately, too little between-plot variation (Qian et al.) to correctly capture the amount of β-diversity. Tuomisto and Ruokolainen further suggested that the plots used in the original study undersample local (α) diversity and therefore overestimate the differences between plots. Both sets of authors suggest that inappropriate sampling would make it difficult to generalize Kraft et al.’s results to other studies of β-diversity. Kraft et al.’s response was that although plots are placed to minimize among-plot environmental variation, this does not make them inappropriate to test for finer scale evidence of environmental processes, and that β-diversity still varies markedly between plots. However, given that this debate - about whether there is a “best” spatial scale at which to examine the ecological causes of β-diversity and a “best” way to sample to capture variation among communities – is occurring among experienced β-diversity researchers suggests that these are still fuzzy areas. 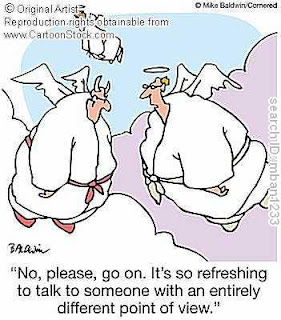 Of course, other points were discussed among the authors. Qian et al. disagreed with the use of latitudinal gradients, noting that the ecological “meaning” of a given latitude is rather vague. However, given that the authors admit their site data is likely to capture small-scale variation in β-diversity, it seems that trying to relate their results to large-scale latitudinal or elevational gradients is a greater issue.

Kraft et al. suggested in their response that many of the criticisms were misunderstandings of the methods and findings of the original paper. You might more correctly say that disagreements like this capture important weaknesses or ambiguities in current understanding and theory. It’s true that at their worst, debates create conflict and that since responses are rarely peer-reviewed to the same extent the original publication is, too much weight may be given to meritless counter-arguments. However, good debate should drive progress, force researchers to reevaluate their assumptions, and ultimately hold science accountable. And for that reason it should be encouraged.

**I should note that this post is specifically meant in relation to debate among researchers, not to situations where scientists are in agreement and the debate is occurring in the public sphere.
Posted by Caroline Tucker at 4/09/2012 09:20:00 AM 6 comments: Links to this post