The birds and the bees and the microbes

"When we try to pick out anything by itself, we find it hitched to everything else in the Universe."- John Muir

You can’t help but marvel at the complexity of ecology, at the intricacy and multiplicity of species interactions. But this complexity is also problematic. For many ecologists, it becomes necessary to focus on a single type of interaction, or on interactions limited to only a few species. But real ecological systems are hardly ever limited to a single important process. They might include competition, mutualism, facilitation, predation, environmental constraints and fluctuations, additive and interactive effects, nonlinearities, thresholds and emergent properties. Can knowledge of  omplexity emerge from simplicity? Can simplicity emerge from complexity? These are important and longstanding questions in ecology, the focus of some of our smartest minds. We may not have the answer yet, but if nothing else, it is helpful when experimental work in community ecology attempts to explore multiple interactions. 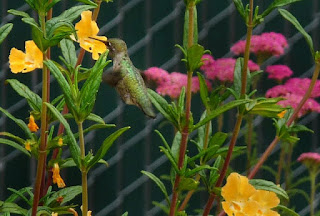 For example, some of the work from Tadashi Fukami’s lab is focused on how communities of microorganisms (yeast and bacteria species) assemble in Mimulus aurantiacus nectar. In the past, this work has focused particularly on priority effects and resource competition, which plays an important role in structuring these communities. While past work has suggested the importance of pollinators as a dispersal vector for microorganisms, fascinating new work suggests that microbial communities have important effects on pollinators and their mutualistic interactions with the host plant as well.

Vannette et al. (2013) focused on the effects of the two most abundant species in Mimulus nectar, Gluconobacter sp., an acid-producing bacteria, and Metschnikowia reukaufii, a yeast. They then looked at three related questions – how do nectar microbes affect nectar chemistry, how do they affect nectar removal by hummingbird pollinators, and how to they affect pollination success and seed set. Basically, do nectar microbes disrupt important mutualistic interactions between the plant and their pollinators, or are their effects neutral?

This is where the story becomes interesting. Both types of microbes altered nectar chemistry, but in different ways. The bacteria acidified the nectar (to ~ pH 2.0) far more than the yeast species, and tended to also reduce the sugar content of the nectar far more than the yeast. Hypothesizing that these changes could ultimately affect pollinator preference, the authors then filled artificial flowers with nectar containing either the bacteria, yeast, or no microbes. Half of these flowers were bagged to prevent hummingbird access. Compared to the bagged controls, flowers with bacteria-inoculated nectar had less nectar removed than either yeast-inoculated or sterile nectar. It appeared that nectar removal was related to the changes in chemistry driven by bacterial growth in the nectar. Finally,  the authors looked pollination success in relation to microbial inoculation. Flowers inoculated with bacteria did indeed have less pollination success (measured as the number of stigmas closed) and had decreased seed numbers. Microbial communities were not isolated from the ecology of the plant.

Perhaps none of this is that surprising – hummingbirds are intelligent and will preferentially feed, and pollinator choice is important for plant fitness. However, these bacteria and yeast species are specialized for growth in the hypertonic nectar environment and their continued presence in the ecosystem depends on dispersal from one flower to the next before their host flower dies. The transient nature of this nectar habitat suggests that obtaining a dispersal vector should be important. The fact that Gluconobacter alters nectar chemistry in a way which negatively affects their likelihood of movement to other patches suggests an interesting paradox and a complicated relationship between plants, their nectar microbes, and pollinators. Gluconobacter species growing in Mimulus flowers produce acidifying H+ ions and reduce sugar concentrations in nectar – this increases their likelihood of winning competitive interactions with other microbes in the nectar, which should select for the maintenance of acidifying, sugar-reducing characteristics. But on the other hand, these characteristics reduce the likelihood of being transported to new flowers and persisting in the metacommunity. Further, these pollinator-decreasing characteristics may result in selection by the Mimulus plants for nectar compounds that reduce microbial contamination. So understanding competitive interactions in microbial communities, or understanding pollinator-plant interactions, or understanding pollinator-microbial interactions on their own might be inadequate to understand the important ecological and evolutionary processes structuring the entire system.

Given that the question of simplicity vs. complexity is still so difficult and at least for me, uncertain, I would hesitate to draw a general conclusion about whether this is the kind of work all community ecologists should strive for. But it seems that recognizing ecological and evolutionary context is key, whether you work with Arabidopsis, microcosms, or tropical forests.

I heard a quote from Noam Chomsky recently where he said something like "nature is simple, it is our job as scientists to show it is simple, and if we can't we have failed". Well Chomsky is not a biologist, he is a linguist and political scientist, among other things. But he is very enlightening, so I have been trying to decide if his statement makes sense in ecology and evolution. There are clearly broader patters and processes that are essentially very simple, but it seems in biology the rule is that the mechanisms that make up larger simplicity are absurdly complex, and more and more complex the more we study it. So perhaps a generalizations is that complexity scales with specificity. Perhaps if you looking for very general patterns all the complex mechanisms are just a wash?