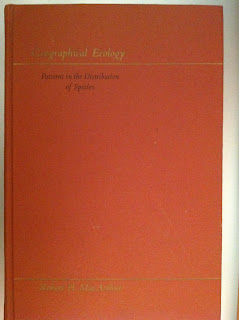 I recently received an old library copy of “Geographical Ecology: Patterns in the Distribution of Species” by Robert MacArthur (1972). It’s the last book that MacArthur wrote before his early death to cancer. It is an ambitious book that connects repeated ecological patterns to mechanisms as broad as the earth’s rotations (producing climate as we experience it) and as focused as organismal behaviour.

But honestly, the thing that has struck me most so far as I read is the timelessness and wisdom in MacArthur's introduction. Issues ranging from focusing on questions versus systems, the value of repeated patterns, complexity, and what generality really means, aren't at all new.

“To do science is to search for repeated patterns, not simply to accumulate facts, and to do the science of geographical ecology is to search for patterns of plant and animal life that can be put on a map. The person best equipped to do this is the naturalist who loves to note changes in bird life up a mountainside, or changes in plant life from mainland to island, or changes in butterflies from temperature to tropics. But not all naturalists want to do science; many take refuge in nature’s complexity as a justification to oppose any search for patterns. This book is addressed to those who do wish to do science. Doing science is not such a barrier to feeling or such a dehumanizing influence as is often made out. It does not take the beauty from nature. The only rules of scientific method are honest observations and accurate logic. To be great it must also be guided by a judgment, almost an instinct, for what is worth studying. No one should feel that honest and accuracy guided by imagination have any power to take away nature’s beauty.

Science should be general in its principles. A well-known ecologist remarked that any pattern visible in my birds but not in his Paramecium would not be interesting, because, I presume, he felt it would not be general. The theme running through this book is that the structure of the environment, the morphology of the species, the economics of species behaviour, and the dynamics of population changes are the four essential ingredients of all interesting biogeographic patterns. Any good generalization will be likely to build in all these ingredients, and a bird pattern would only be expected to look like that of a Paramecium if birds and Paramecium had the same morphology, economics, and dynamics, and found themselves in environments of the same structure.”
--Robert MacArthur

It's interesting that an introduction written in 1972 is so relevant that it could have been written today. The pessimistic view is that ecology is just iterating through the same problems and solutions, or progress is slow. Or maybe classic books remain as classics because their authors understood and explored the issues at the core of the science and had the benefit of being there in the formative years. It's fun to see that when MacArthur thanks particularly four friends who influenced his work most, he means G. Evelyn Hutchinson, E.O. Wilson, Richard Levins, and Jared Diamond. I suppose any book influenced by the combination of all these scientists and written by MacArthur will always have something interesting to say.
Posted by Caroline Tucker at 6/28/2013 08:00:00 AM

I should first say that I love the blog, but am again going to disagree.

I love that passage too, but I've come to disagree with it. You can be too general (e.g. -- although this is a matter of opinion -- Brown's metabolic theory).

I prefer Levins' (1966) take on all this generality stuff, which is that there are three things that scientific models 'want' to achieve: generality, precision, and realism. Levins argues however that usually you need to trade one of these off for the other two that you care more about. For example, Levins himself (and MacArthur) prefer generality and realism, and so trade off precision (so does Brown). In natural resource departments you trade-off generality for precision and realism, because you only care about specific populations (of fish say) that people want to exploit and that you are charged with managing. In math-bio circles, realism is generally traded-off for generality and precision. Being too realistic leads to models that can't be treated analytically and theorems remain conjectures, which is just no fun for mathematicians. But the important point that Levins makes is that all these endeavors count as science. That's essentially why I buy Levins over MacArthur. They both take similar approaches (trade off precision for generality and realism), but Levins doesn't get up on his high horse and say that anyone not doing what he's doing is not doing science.

Hey Steve - I always enjoy your disagreements.
And I'm also a fan of Levin's triangle of model tradeoffs, and that's a really great description of it. I don't really see this as a Levin's vs. MacArthur issue though (at least not based on this paragraph anyways): MacArthur's statement here is about how we decide what is worth studying, Levin's is more specifically about what we can capture in a model.

I guess I didn't interpret this passage so much as MacArthur "get[ting] up on his high horse and say that anyone not doing what he's doing is not doing science". I interpreted it rather as MacArthur saying that generality is not about looking for universal patterns across systems (i.e. like an intermediate disturbance effect or a pattern across protists and birds) but rather looking for mechanisms which occur across systems (even if the resulting patterns differ, as they so often do).

Hope this makes sense: I'm semi on vacation and less in 'science mode' than normal... :)

You're right. Thanks for the push back. I was being too extreme.

I still don't like how MacArthur tries to divide studies of nature into scientific and non-scientific categories, but I did go too far by extrapolating beyond my knowledge of Levins. As far as I know, he may have been just as scientistic as MacArthur.

This article is mind blowing I read it and enjoyed. I always find this type of article to learn and gather knowledge.