One of the big topics in ecology in recent years is ecosystem services and functioning. In particular, the question has been how diversity (in its many forms, including species, intraspecific, phylogenetic, or functional) relates to ecosystem function (often, but not always, measured in terms of productivity). Most often, this is framed as a question about how (alpha) diversity at the local scale affects one or two functional responses. Because diversity can be measured at multiple scales (local, regional or landscape, etc), because how we measure diversity is scale-dependent (i.e. alpha, beta, and gamma diversity), and because a functional ecosystem relies on many different services, the obvious next step is to think of biodiversity and ecosystem functioning in a framework that incorporates multiple spatial scales, multiple functions, and multiple measures of diversity.

A new paper in PNAS takes advantage of David Tilman’s long running Cedar Creek biodiversity experiment to explore how multiple functions in a landscape relates to local and regional diversity, and beta-diversity. In Pasari et al. (2013), the authors use five years of data collected for 168 9x9 m plots in the Cedar Creek experiment. These plots contained 1, 2, 4, 8, or 16 perennial plant species, and had measurements for 8 ecosystem functions (invasion resistance, aboveground NPP, belowground biomass, nitrogen retention, insect richness and abundance, and change in soil C and plant N). The authors simulated combinations of these plots to create 50,000 landscapes composed of 24 local plots. Multi-functionality in this case was the (scaled) mean of each of the 8 functions minus their standard deviation, for the landscape. The authors then asked whether the average alpha-diversity of the local plots, the beta-diversity between plots, and the gamma-diversity of the landscape were important predictors of this multi-functionality.

Not surprisingly, when considering the different functional responses individually, the average alpha-diversity of plots in a landscape was the most important determinant. Past research has shown that as local diversity increases, niches may be filled, or functional redundancy may increase, and so ecosystem functioning tends to increase. When considering all 8 ecosystem functions using a single measure though, beta- and gamma-diversity also appeared to be important, although alpha diversity remains the dominant predictor (figure below). It should be noted though that the total explained variance in functionality was always low. Increasing either alpha- or gamma-diversity increased multi-functionality, while the effect of beta-diversity on ecosystem functioning was not linear. “[O]nly experimental landscapes with low β diversity were capable of achieving very high multi-functionality, whereas high β-diverse experimental landscapes more consistently achieved moderate multi-functionality”. One important conclusion suggested by these results, then, is that even at larger scales the most important determinant of ecosystem function is how local communities are assembling, since this determines local diversity. 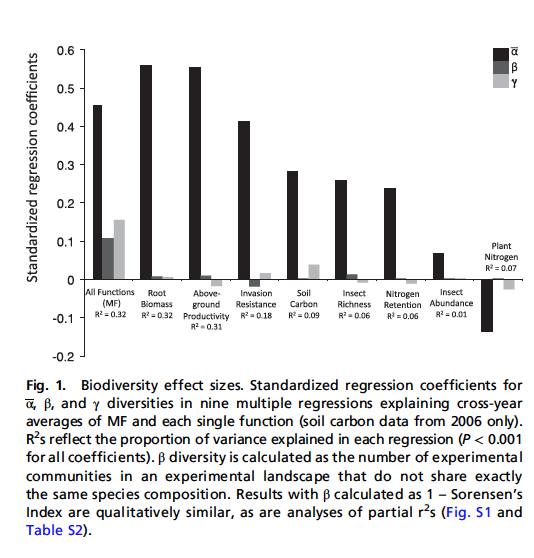 These results are an important update to the current state of biodiversity ecosystem function research, and add to the large body of research that says that all types of diversity are important insurance for functioning natural systems. It is difficult from this study to get a clear picture of how important each type of diversity is, and when alpha, beta, and gamma diversity might be more or less important. This is in part because despite the upsides of having multiple years of tightly controlled data from the Cedar Creek data, experimental communities artificially combined into landscapes lack realism. For example, beta-diversity captures turnover between communities that may result from spatial dynamics (environmental heterogeneity, dispersal, biotic interactions). All of these characteristics may be very important for functioning at the landscape scale. The response from Mokany et al. expresses some of these concerns, noting that artificially creating landscapes like this may omit important spatial and temporal connections found in real systems.

In addition, and this is a more technical concern about how alpha, beta, and gamma diversity are defined, I’m not clear on what the implications of using all three measures as explanatory variables in the same model may be. Mostly because under the strictest definitions of diversity, these three terms should be dependent on each other – changes in alpha and beta diversity necessarily alter gamma diversity. The authors didn’t use this definition in their study, but to understand the mechanisms that relate diversity and functionality, it may be more informative to take this inter-relationship into account.

Despite any caveats, I think that a role for beta-diversity in ecosystem functioning will be shown in further work, and perhaps its role will prove to be much greater than these initial results show. As we expand our understanding of the scales at which diversity matters, unfortunately this will no doubt highlight the limitations in our conservation focuses even more.
Posted by Caroline Tucker at 10/24/2013 11:13:00 AM

From somebody mostly ignorant of plant ecology, is there a reason for the negative alpha diversity coefficient associated with plant nitrogen content?

Hi - I'm not sure either (perhaps there is a plant ecologist who can help out). It looks like this is a typical result seen in BEF for plant nitrogen - obviously a-diversity isn't a great predictor of plant nitrogen, but the mechanism behind it, I'm not sure.