As the United States enters the 10th day of its government shutdown, the impacts on science and scientific researchers are becoming very apparent. Ignoring the political mess, the fact is that the shutdown is having devastating effects for science, ranging from small to very large scales. 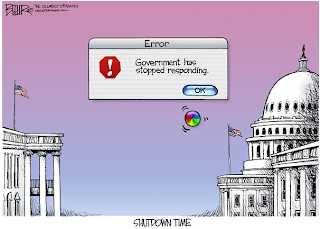 Some of the largest obvious effects relate to the cessation of highly necessary services. For example, the majority of employees the Centers for Disease Control and Prevention were furloughed. Days later experts on foodborne illness were called back to work, because, surprise, they are essential in cases of E. coli outbreaks. Similarly, nearly all of the Environmental Protection Agency’s employees were furloughed, which means that air and water quality monitoring is furloughed too. According to one employee: "No one is going to be out inspecting water discharges, or wet lands. Nobody is going to be out inspecting waste water treatment plants, drinking water treatment plants, or landfills – nothing". Most of the employees whose work relates to climate science research and related environmental controls at the EPA, NASA, and the National Oceanic and Atmospheric Administration (NOAA) are also no longer at work.

Non-government scientists of every form are also being affected in multiple ways. The overwhelming issue is that the National Science Foundation (NSF) and National Institute of Health (NIH), have been all but closed. (For a great illustration, flip through the messages currently on US gov't science webpages, here). Technically, these furloughed employees are prohibited from replying to phone calls or answering emails from their work email. From one furlough letter: “Due to legal requirements, working in any way during a period of furlough is grounds for disciplinary action, up to and including termination of employment”. If your supervisor or collaborator is a federal scientist, this is a very direct impact of the furlough. But more generally and most importantly, these agencies (particularly the NSF for EEB academics) is the primary funding source for many scientists and institutes, and that means that until the shutdown is over, there will be no new payments or grants awarded.

(From nsf.gov/outage.html, regarding new awards)
"Proposal Preparation & Submission
No new funding opportunities (program descriptions, announcements or solicitations) will be issued.
FastLane proposal preparation and submission will be unavailable."
(existing awards)
"Performance of Work
Awardees may continue performance under their NSF awards during the shutdown, to the extent funds are available, and the term of the grant or cooperative agreement has not expired. Any expenses must be allowable and in accordance with the Office of Management and Budget (OMB) cost circulars. During the shutdown, NSF cannot authorize costs exceeding available award amounts or obligate additional funds to cover such costs.
Payments
No payments will be made during the shutdown."
If your grant is up for review or you are applying for a new grant (it was DDIGs season), then you are out of luck for the moment (FastLane, necessary for submitting grants, is not available), and there undoubtedly will be delays in processing once the shutdown does end. 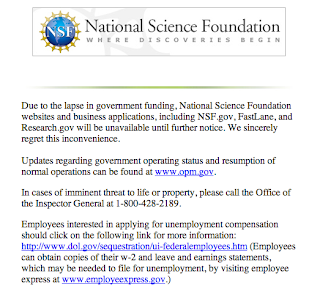 Even if you have money to spend, limitations may arise from the fact that permits for research activities can’t be filled, and National Parks, National Wildlife Reserves, National Forests are all closed, so planned field activities may be limited. For example, Long-term Ecological Reseach projects (LTERs), which by definition require continuity in sampling, some projects are now inaccessible. Researchers in charge of long-term studies of rodent populations in Sevilleta National Wildlife Refuge, New Mexico, found the gates locked and the combinations changed, making monitoring stations impossible to reach. If you were planning a field season in Antarctica, you are especially out of luck, since the field season has been cancelled altogether. If you planned to use the collections at a national museum (e.g. the Smithsonian), or use government websites and federally funded data repositories, you can’t. I’ve received several mass emails from researchers attempting to locate other sources of necessary data, since their government source is gone. Even if you aren’t a researcher in the US, you might notice the effect of the shutdown because the high profile open-access journal from the Public Library of Science, PLOS ONE, is also at a standstill. And if the keynote speaker at your conference is a US government employee, you’ll notice their absence, since they are not allowed to attend conferences.

Given the global nature of science, these effects are not isolated to only just a single country in the world – scientists everywhere share US websites and institutions, museum collections, collaborate with US-located researchers, government or otherwise, do fieldwork in US national parks, or rely on the continuity of data from long-term research projects. The impacts of this shutdown are broad and deep, and the most important question is how long will it take for science and scientists to recover?


*If anyone has examples of how this shutdown is affecting their research, please leave a comment!
Posted by Caroline Tucker at 10/10/2013 09:08:00 AM

And the USDA PLANTS database is down, just when we needed it...

But ultimately, it is likely that those who are responsible for shutting down the government do not actually care if science and research are impacted. The Tea party wing wants to defund these type of endeavours anyway, so this shutdown is a win-win for them -unless they actually care what the broader public and electorate thinks about the shutdown.

As much as they may not care if science and research is affected, everyone (including them) suffers if no one is studying disease outbreaks or checking that your drinking water is safe.
I think there's an interesting comparison with the political damage to science in Canada though - it's (temporary?) brutal, department-wide damage in the US, versus insidious, focused, highly ideological damage in Canada. Wonder which one will have longer-term effects?

My field work is planned to start in 5 days, however work is conducted on military lands and National Wildlife Refuges. Flights and vehicle rentals are all booked, but we have nowhere to work. The month long collection trip may amount to me sitting in front of military gates waiting for their doors to open!

I can't get in to the National Museum of Natural History, where I've been working on my dissertation as a "pre-doc" fellow with the Smithsonian. All my specimens are there, as are the materials I need to work on them. I'm working on other dissertation projects in the meantime, from home, but this project is at a complete standstill.