A little navel gazing is good for ecology. Although maybe it seems like it, ecology spends far less time evaluating its approach, compared to simply doing research. Obviously we can't spend all of our time navel-gazing, but the field as a whole would benefit greatly from ongoing conversations about its strength and weaknesses.

For example, the issue of theory vs. empirical research. Although this issue has received attention and arguments ad nauseum over the years (including here, 1, 2, 3), it never completely goes away. And even though there are arguments that it's not an issue anymore, that everyone recognizes the need for both, if you look closely, the tension continues to exist in subtle ways. If you have participated in a mixed reading group did the common complaint “do we have to read so many math-y papers?" ever arise; or equally “do we have to read so many system specific papers and just critique the methods?” Theory and empirical research don't see eye to eye as closely as we might want to believe.

The good news? Now there is some data. Ben Haller did a survey on this topic that just came out in BioScience. This paper does the probably necessary task of getting some real data beyond the philosophical and argumentative about the theory/data debate. Firstly, he defines empirical research as being involved in the gathering and analysis of real world data, while theoretical research does not gather or analyze real world data, instead involves mathematical models, numerical simulations, and other such work. The survey included 614 scientists from related ecology and evolutionary biology fields, representing a global (rather North American) perspective.

The conclusions are short, sweet and pretty interesting: "(1) Substantial mistrust and tension exists between theorists and empiricists, but despite this, (2) there is an almost universal desire among ecologists and evolutionary biologists for closer interactions between theoretical and empirical work; however, (3) institutions such as journals, funding agencies, and universities often hinder such increased interactions, which points to a need for institutional reforms."
For interpreting the plots – the empirical group represents respondents whose research is completely or primarily empirical; the theoretical group's research is mostly or completely related to theory, while the middle group does work that falls equally into both types. Maybe the results don't surprise anyone – scientists still read papers, collaborate, and coauthor papers mostly with others of the same group. What is surprising is that this trend is particularly strong for the empirical group. For example, nearly 80% of theorists have coauthored a paper with someone in the empirical group while only 42% of empiricists have coauthored at least one paper with a theorist. Before we start throwing things at empiricists, it should be noted that this could relate to a relative scarcity of theoretical ecologists, rather than insularity on the part of the empiricists. However, it is interesting that while the responses to the question “how should theory and empiricism coexist together?” across all groups agreed that “theoretical work and empirical work would coexist tightly, driving each other in a continuing feedback loop”, empirical scientists were significantly more likely to say “work would primarily be data-driven; theory would be developed in response to questions raised by empiri­cal findings.”

Most important, and maybe concerning, is that the survey found no real effect of age, stage or gender – i.e. existing attitudes are deeply ingrained and show no sign of changing.

Why is it so important that we reconcile the theoretical/empirical issue? The paper “Rising complexity and falling explanatory power in ecology” offers a pretty compelling reason in its title. Ecological research is getting harder, and we need to marshall all the resources available to us to continue to progress.

The paper suggests that ecological research is experiencing falling mean R2 values. Values in published papers have fallen from above 0.75 prior to 1950 to below 0.5 in today's papers. 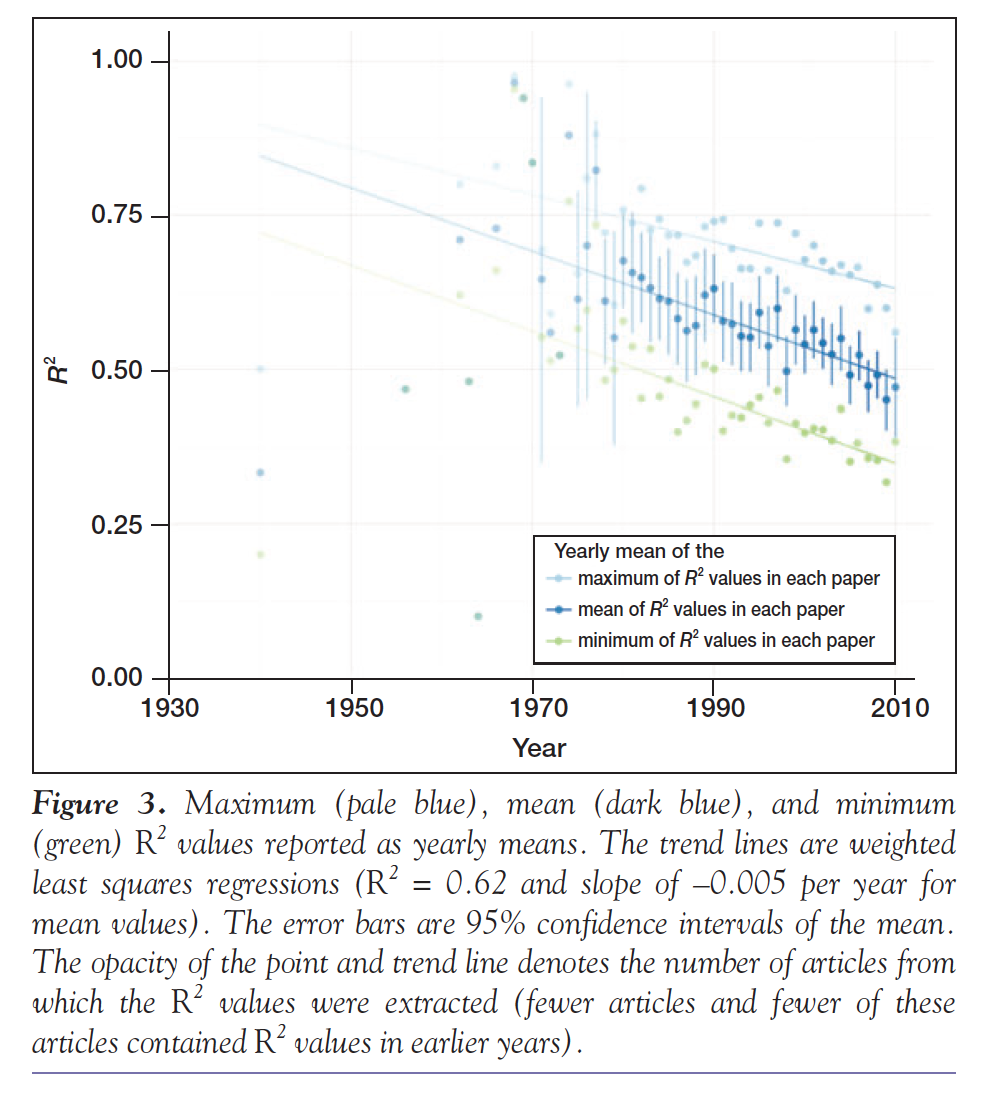 The worrying thing is that as a discipline progresses and improves, you might predict that the result is an improving ability to explain ecological phenomenon. For comparison, criminology was found to show no decline in R2 values as that matured through time. Why don’t we have that?

During the same period, however, it is notable that the average complexity of ecological studies also increased – the number of reported p-values is 10x larger on average today compared to the early years (where usually only a single p-value relating to a single question was reported). 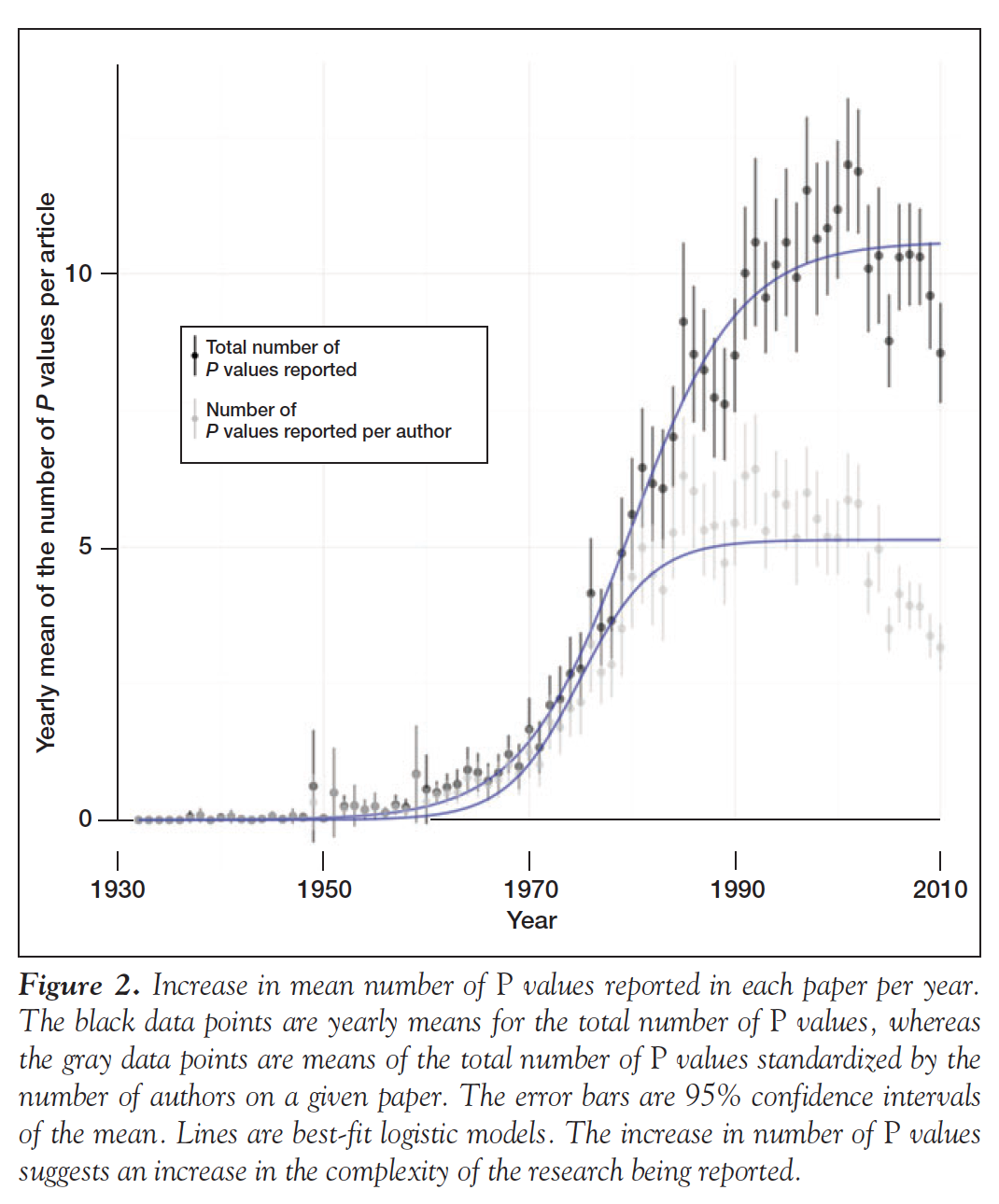 The fall in R2 values and the rise in reported p-values could mean a number of things, some worse for ecology than others. The authors suggest that R2 values may be declining as a result of exhaustion of “easy” questions (“low hanging fruit”), increased effort in experiments, or a change in publication bias, for example. The low hanging fruit hypothesis may have some merit – after all, studies from before the 1950s were mostly population biology with a focus on a single species in a single place over a single time period. Questions have grown increasingly more complex, involving assemblages of species over a greater range of spatial and temporal scales. For complex sciences, this fits a common pattern of diminishing returns: “For example, large planets, large mammals, and more stable elements were discovered first”.

In some ways, ecologists lack a clear definition of success. No one would argue that ecology is less effective now than it was in the 1920s, for example, and yet a simplistic measure (R2) of success might suggest that ecology is in decline. Any biases between theorists and empiricists is obviously misplaced, in that any definition of success for ecology will require both.
Posted by Caroline Tucker at 8/25/2014 10:06:00 AM

@willpearse looks deeper into this publically available data from the paper and finds that although the regression was still significant, the r2 is 4% which is quite a lot less than the 62% the authors obtained when they averaged out their variation at the year-level. Read more here: http://willeerd.wordpress.com/2014/08/29/r2-of-an-r2-of-r2s-progress-in-ecology/