A changing world: Themes from the 2014 BES-SFE meeting in Lille #BESSfe 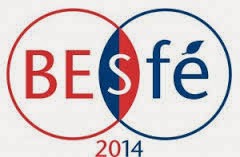 I attended the joint British Ecological Society/Société Française d’Ecologie (BES/SFE) meeting held in Lille, France, Dec. 9-12. I quite enjoy BES meetings, but this one felt just a little more dynamic and exciting. The meeting did a great job of bringing people together who otherwise might not attend the same meetings. The overall quality of talks was excellent and the impression was that labs were presenting their best, most exciting results. One thing that always fascinates me about meetings is the fact that emergent themes arise that reflect what people are currently excited about. Over the three days of talks, I felt that three emergent themes seemed particularly strong among the talks I attended:

1) Pollinators in a changing world

There were a surprising number of talks focusing on human-caused changes to landscapes affect pollinator abundance and diversity. I am an Editor of a British Journal (Journal of Applied Ecology) and work on pollinator diversity has always been stronger in the UK, but there were just so many talks that it is obvious that this is an important issue for many people in the UK and Europe. Nick Isaac examined whether butterfly abundance was related to the abundance of host plants –which should be a measure of habitat quality. Plants that serves as hosts for caterpillars were more important than those that supply nectar to adults, presumably because the adults can better find resources. And specialist species were especially sensitive to host plant diversity.

Adriana De Palma gave a great talk on reanalyzing global patterns of bee responses to land-use and showed that biases in where research is done is influencing generalities. Bee communities in some well-studied regions appear more sensitive to land-use change and those regions with many bumblebees mask effects that on other types of bees. Bill Kunin examined patterns at a regional scale (UK) where a pollinator crisis was identified in the late 2000s and causes have been attributed to everything from land-use change to pesticide use to cell phones -to the second coming of Jesus. Habitat quality and flora resources do not seem to be that important at large scales, but there seems to be a strong effect of pesticide use. But at a smaller landscape scale, Florence Hecq showed that habitat heterogeneity within agricultural landscapes and the size of semi-natural grasslands were important for maintaining pollinator diversity. Changes in pollinator diversity have consequences for crop yield, as shown nicely by Colin Fontaine.
In a really interesting study, Olivia Norfolk showed that traditional agriculture practices by Bedouin minorities in Egypt enhanced pollinator abundance. Because their agricultural practices support high plant diversity, both wild and domestic plant species, pollinators fare better than in intense agriculture. Moreover, one of the most important crops, almonds, sees higher yield with higher plant diversity –though this effect is lost when there are a lot of introduced honeybees.

2) Effects of land-use on biodiversity

A number of other talks examined how human-caused changes influence biodiversity patterns and resulting functions across a number of taxa. Jonathan Tonkin examined a number of different types of species (plants, beetles, spiders, etc.) that occur along riparian habitats and showed that there weren’t concordant changes in richness, but there were simultaneous shifts in composition. Human stressed caused multiple communities to shift to very nonrandom community types. In Agricultural systems, Colette Bertrand showed that agriculture that changed frequently (e.g., crop rotation) supported more beetle species that systems where the same crops are planted year after year.

Human deforestation greatly changes many biodiversity patterns and we need to better understand these make sound conservation decisions. Cecile Albert examined land-use change and fragmentation in southern Quebec and showed that we can determine the importance of forest patches in human-dominated landscapes for the ability of species to move between large forested areas. Using her model she can identify where conservation and habitat protection should be focused. Nicolas Labriere studied how different forest changes influenced the delivery of ecosystem services, including carbon storage, diversity and soil retention. He showed that only intact forests were able to maximally deliver all ecosystem services.

A major theme is how species differences are important for ecological processes, ecosystem function and conservation. I’ve argued elsewhere that we are heading into a paradigm shift in ecology, where we've moved from counting species to accounting for species. Wilfried Thuiller asked how well European reserves conserve different forms of biodiversity, namely functional and phylogenetic diversity. He prioritized species by their distinctiveness and range size so that the most important were functionally or phylogenetically unique and have a small range. Distinct mammals tend to not be well protected and the modern reserve system does not maximally protect biodiversity. This is most acute in eastern Europe where there is a order of magnitude less protected area than in western Europe.

Georges Kunstler argued that trait approaches to understanding competition are valuable because they can reduce the dimensionality of students, from all pairwise species interactions to relative simple measures of trait differences. He showed, using an impressive global forest dataset, that competition appears stronger when neighbour trees are more similar in their traits.

A number of talks examined if measures of species differences can explain biodiversity patterns. At very large scales, Kyle Dexter showed that phylogenetic diversity does not explain where species are across the neotropics. In some places species are in the same habitat as a close relative and sometimes with a distant relative. At smaller scales, talks explored trait or phylogenetic patterns Andros Gianuca, Anne Pilière and Lars Götzenberger all assessed the relative contributions of trait and phylogenetic differences to explain community patterns and all showed that phylogeny may be a stronger explanation than the traits they measured.

Understanding tree growth and dispersal are key to predicting how forests will respond to environmental change and to successfully managing and conserving them. Sean MacMahon showed that the seasonality of tree growth is critical to modelling carbon flux in forests. He developed an ingenious set of modelling approaches to analyze daily tree diameter change and showed that growth is highly concentrated in the middle of the growing season, which is at odds with traditional conceptual models where tree growth is constant from spring to fall. Noelle Beckman examined tree dispersal and the consequence of losing vertebrate seed dispersers. She showed that reducing the number of seed dispersers results in low seeding survival because seedlings are locally very dense, instead of being dispersed, and seed predators and other enemies have an easier time finding them.

The mechanism most often cited by plant community ecologists is competition, but Christian Damgaard states that this simple mechanism is almost never tested. Further, models of competition are often based on numbers of individuals, but plants make such counts notoriously difficult. Instead he developed a very elegant model showing how plant height and horizontal cover feedback to competition. What he calls vertical density is a predictor of the following season’s horizontal cover. Competition is also key to observing a relationship between species richness and ecosystem function. Rudolf Rohr showed, using a series of Lotka-Volterra models that randomly assembling communities always results in a positive relationship between richness and function –which is why experiments often support this pattern. In natural communities, this relationship often disappears, and he shows that simulations with competitive sorting break this relationship.

Finally, Florian Altermatt examined whether the physical structure of stream networks influences the distribution of diversity in streams using protozoan and bacterial communities in series of connected tubes that look like a branch, and compared these to linear tubes. He found that diversity is highest in the interior branches (see image to the left), much like real rivers, and the linear system had no such pattern of diversity. He attributed part of this diversity gradient to competitive differences among species and differences in movement of the organisms.

Wonderful post!! Thanks for sharing this here. I also heard about this BES-SFE meeting. It was a very right step for the world. My friend was present in the meeting rooms and he was really very impressed by all the decisions that had been made in this conference meeting.