Reining in traffic –looking to China for solutions?

Human impacts on landscapes are immense. Urban areas represent complete transformations of the geological, hydrological and ecological norms in landscapes. But while urban effects are concentrated to relatively small areas, the roads and rail lines feeding cities create a pervasive and diffuse network of negative impacts. Roads funnel rain runoff and can cause local flooding and this runoff also concentrates pollutants. Further, roads alter wildlife movement. For example, the fragmentation of formerly continuous forest in Florida is worsened by large busy roads, and black bears there are unable to move long distances to find mates. The result of this is that the Florida Black bear populations are getting smaller and more genetically inbreed.

Roads are created to meet traffic demands. The more people drive and the further they drive, the more roads we build. Cities around the world are growing, meaning that more cars are concentrated in small areas. The increase in automobile use also has direct environmental consequences. Cars, thanks to their internal combustion engines, add pollution to our local environments –carbon monoxide, particulate matter, and other toxins create smog, exacerbate respiratory ailments, and contribute to global warming.

More cars also means more traffic congestion and greater difficulty in getting from A to B, meaning that we spend more time travelling to, instead of being, somewhere. Heavy reliance on automobiles directly affects our quality life in both positive and negative ways.

Given the undesirable consequences of cars, many cities try to reduce car use. In North America, cities employ a number of strategies, including: minor improvements to public transit (while often passing on the costs to riders), creating car free zones (which have been very modest in North America, whereas European cities have been much more successful –Montpellier, France is a great example), introducing tolls, and limiting parking in the city core. It is safe to say that the North American approach to dealing with traffic has been less than spectacular –just drive through Toronto or Los Angeles during rush hour.

Living in China for the past several months, I have been intrigued by how Chinese jurisdictions have dealt with traffic. And traffic was something that needed dealing with here. In the late 1990s and early 2000s, thousands of new cars were added to roads every single day.  The air quality in China is abysmal and having hundreds of millions of cars driving at the same time only make things worse. So governments in China decided to experiment with ways to reduce automobile use.

There can be no real traffic solutions without building fast, efficient and affordable public transit. China has been a world leader in public infrastructure development over the past ten years. For example, Shanghai has one of the largest metro systems in the world, and has opened a new line every other year since 1999! They are currently building two new lines, which will give Shanghai 18 metro lines and about 400 stations. In Guangzhou, where I currently live, they also have a very modern and rapidly expanding metro system. Guangzhou currently has 8 lines with 4 more under construction! In all the Chinese cities I’ve been in, the metro systems are modern, efficient, heavily used, and very affordable. In Guangzhou, a bus ride works out to be about 35 cents US and a metro trip to the airport (the longest trip you can take in Guangzhou I believe) is about $1.15 US.

In Toronto, where I normally live, and like most other large North American cities, subway construction has not been sufficient to keep up with population growth. Local politicians seem to be unable to make the tough decisions to get public transit infrastructure built. But this infrastructure is the linchpin for any successful reduction in automobile usage.

During the 2008 summer Olympics, Beijing created a system where cars were allowed on the roads only on certain days. Which days people could drive their cars depended on the last number of their license plates. This scheme was successful in reducing traffic congestion and air pollution. Since then, they have periodically reinstated this policy, especially during extremely bad air pollution days. I was there in early December, and road sharing was in effect then.

3) Making license plates really, really expensive (or difficult to get).

In Guangzhou, Beijing, and Shanghai, getting a car is easy, but getting a license plate, now there is the real hurdle. Since 2012, Guangzhou and other cities have severely limited the number of license plates issued, and now people can get a plate in one of two ways in these cities: by joining a lottery or going to an auction. In the lottery, a person submits an application and waits for the results. One person told me it took them three years to get their plate in the lottery. In the auction, the plates go to the highest bidder and the price for a license plate at auction has sky rocketed. A person told me that plates at auction now go for more than 60,000 RMB (about  $10,000 USD), which costs more than an economy car here! This person also quipped that the plates have become more of a status symbol than the actual car.

4) Your license plate will die

In Guangzhou and other cities, license plates expire. No, not like they expire in North America where you pay an annual license fee. They expire after 10 years and are no longer valid, and the driver must re-enter the lottery.

Many of the intercity highways have tolls here. While this is not a policy that affects travel behaviour within cities, it does influence driver choices traveling outside the city. Tolls only work when there are decent alternatives, and the rail system in China is excellent. There are frequent trains and many high speed lines in operation (where the trains go faster than 250 km/h). We don't have many toll roads in Ontario, but the one we have near Toronto, hwy 407, doesn't go into the city (so doesn't influence commuter decisions), and does not have viable options for alternative travel. This highway is an example of poor government policy and it was one of the worst policy decisions by a government who thought private companies should run public infrastructure. Its nothing more than a cash grab that doesn't serve the broader good. But I digress.

I have been struck by the variety of approaches and the experimental nature of policy making. What I mean by experimental, is that some policies seem to be ‘test run’ to see how people respond and if the policies result in the desired effects. China is able to institute creative and extreme measures because of the government’s unique ability to change policy without public debate. Often these policies are instituted overnight with little warning. In China, people seem to take government edicts with a “well, what can you do?” attitude. But if there is a country that can change the automobile culture, China is a good candidate. They did change what a family was with the one-child policy.

While most North Americans would certainly have a problem with the lack of transparency and seemingly impulsive nature of government decisions, China is providing the world with working examples of how to reduce the number of automobiles. It is clear to most, that without strong governmental leadership, a robust set of policies, and massive infrastructure investment, heavy automobile traffic will be unavoidable. 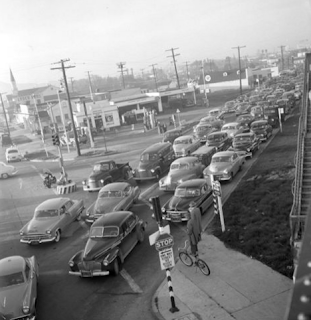 Yes – but your title is causing me pain. The idiom is "reining in", as in pulling on the reins of a horse to make it slow down, not "reigning in", which makes no sense. Pet peeve, sorry. Not as bad as when people write "waiting with baited breath" – that always makes me imagine someone whose bad breath smells like they have been eating worms. :->

Thanks. Momentary brain-fart. What I get for late night blogging.
MC