Frank the Fish made me an Environmental Scientist

Children are intelligent, autonomous human beings, and although they lack experience in many things, that does not make their thoughts, feelings, and values invalid. Children are some of the most compassionate people you will meet and influencing them in a positive way early on in their development is crucial for the sake of a brighter future for humankind.

A lot of this positive influence must come from science. Understanding our planet’s functions and learning the structure and behavior of the physical and natural world is crucial to ensure that we can protect it. However, to do this, we as scientists need to be experts at communicating science. We need to pass down what we learn in a way that is understandable, not just for new-coming scientists, but for those without the background as well.

Science communication can be discouraging for many. The fear of “dumbing down” one’s work until it is no longer factual or legitimate is always a concern among scientists. In addition to this, many scientists simply do not have the background to effectively communicate their science. They might lack the training or the resources to do so. Just having the public’s attention long enough to get one’s point across can be extremely difficult to do. If someone told you there was going to be a talk about eutrophication in the Great Lakes, would you go? If you were scrolling down Twitter or Facebook, would you stop long enough to understand what that table or graph you were seeing meant?

Let’s do a little experiment.

What graph is easier to understand?

Taken from Twitter to discuss climate change, a graph obtained from John O'Sullivan & Norm Kalmanovich’s news article: What Michael Mann’s ‘Hockey Stick’ Graph Gave To UN Climate Fraud, which was taken from Michael Mann’s 1999 paper showed a confusing analysis that is hard to interpret without some background knowledge in climate change. 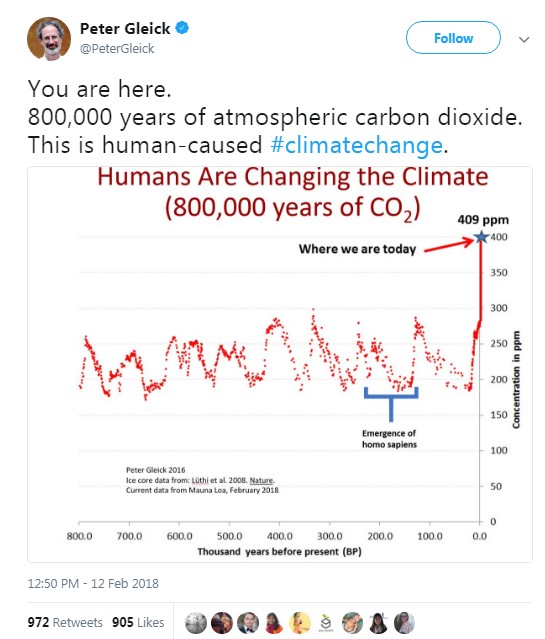 Also taken from Twitter, an easy to understand tweet from Peter Gleick about climate change and what it means.

The issue with science communication is that it's a double-edged sword. You need to make your information enticing to the audience, but you need the resources and the proper training in order to do so. And the only way to get that support is through the interest and push from the public. It’s a vicious cycle; like a student being told they need experience for a job —but needing that job for the experience. The fact of the matter is; most scientists don’t have those resources or training to communicate their research to a wide audience, which makes it difficult to get the public to care for their cause and push for better science communication in the first place.

Now imagine taking that fear and doubling it as you try to communicate to children, the future of our planet’s well-being.

In a study completed by Andrea Bou - Vinals and Silvia Prock, scientists admitted to having many fears when trying to communicate with children. In Bou-Vinals and Proc’s study, scientists were made to run a workshop and roleplay with children ages 9 to 13 with the goal of engaging them in scientific activities. The consensus of this experiment was that scientists were afraid that they were boring the children or that they wouldn’t be able to get their scientific knowledge across. On the children’s end, their interpretation of the experiment was that the scientists were there to “please children, because children are the future” and “having fun with knowledge transfer.” It shows that children are aware of their importance, and the importance of learning from scientists.

We as scientists need to understand that proper, easily comprehensible communication is key to getting people to care. Scientific literature often sounds extremely unbiased and un-opinionated. The issue with this is that most people are not trained to read scientific literature. There is jargon and difficult words that many will not understand because they will never have the context for it. To communicate effectively a scientist, there must be a compromise in the language to get your point across. Sometimes, you must sacrifice the language entirely and use other means for communication, i.e., videos, infographics or applied/interactive experiments.

We as the public also need to understand that science is important. We need to improve our scientific literacy and look for answers to questions that might strike us on a day-to-day basis. We need to encourage ourselves to take the first step and seek knowledge, and in turn, pass that behaviour on to our children as well. We must expose our children to the knowledge we have, and trust that they can understand what is being presented to them. We as the public need to support our scientists and push for their information to become easily accessible and comprehensible to us, as it is the masses that often influence the choices of policy makers.

Children are important because they are easily impressionable. I speak from personal experience when I say that the most conservation-driven choices I make today stemmed from early education and youthful experience. For example, a habit that I formed when I was young was letting the tap water run while brushing my teeth. Although turning it off seems like the obvious thing to do, it was more convenient for me to let it run until I was finished. The implications behind why this was bad to do was not apparent until I watched a commercial from Sesame Street. It made the reason behind why I should conserve water very obvious and very clear to me at a young age, and I still think about it to this day.

The video still holds impact. The animation is clear, the audio is crisp, and the message is still extremely relevant. What’s interesting is that the majority of the comments on the video reflected my exact thoughts and feelings. The video stuck with me after several years and is always the first thing that comes to mind when I think about conserving water, or conserving anything, for that matter. Even now, sitting in a graduate level Conservation Biology class, when we discuss the impact of human activity on the natural world, I automatically imagine Frank the Fish stuck in his dried-up pond. 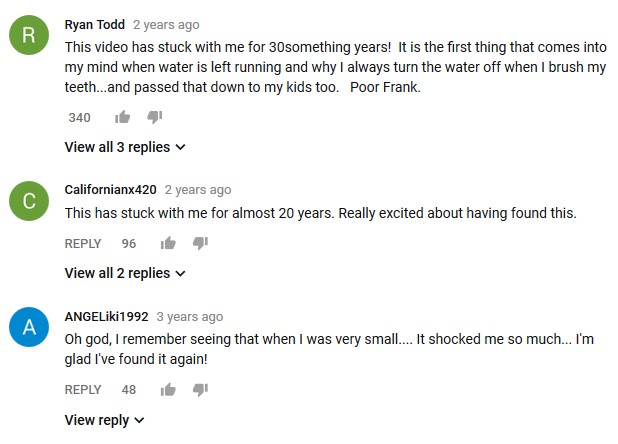 So why was this video so hard to forget? Why did it have such a clear impact on me and several others?
As a seven-year-old living on the 6th floor of an apartment complex, I didn’t have a backyard to begin with, and yet the message was clear. Because I had seen a natural environment before, I understood that my actions were indirectly impacting that area of nature I had once seen. And because I was able to relate it to that, I was able to empathize with the commercial and change my behaviour as a result.

This video was an effective tool of science communication. As environmental scientists, we all know that running water does not directly drain a pond in your backyard. There’s a lot of complicated architect, engineering and science that goes behind how we get our clean water from the environment; and yet the public —and children especially— needed none of those small details to understand the big picture.

It was an effective tool of science communication because it showed me, and people like me, the direct impact of my behaviour in the grand scheme of things. The video influenced me as a child and encouraged me to pursue a field of biology and environmental science as a result. And now, this video will be passed down because it has been presented and saved in a form of media that can be spread and shared with a simple click of a button.

Our goal as members of the human race should be to constantly ask the question: do I understand this? Would I be able to explain this to my children so that they can understand it? Truthfully, we won’t always be able to. But if we support our scientists and give them the tools and support they need to effectively present their work to us, and trust that our children are clever enough to understand what they are being told, great things can happen.