There is no doubt that the global spread of COVID-19 represents the defining crisis of the last decade. Governments around the world have scrambled to try to reduce person-to-person spread and deal with pressures on public health infrastructure. Regions with community spread have almost universally faced restrictions on travel, business and social activities. These restrictions are designed to reduce the exponential spread of COVID-19 (that is, to flatten the curve), these restrictions will also have a large number of other economic, social and environmental repercussions. Here, I ask a simple question: Has reductions in economic activity and movement caused by governmental responses to COVID-19 improved air quality in cities? I compare February 2019 and 2020 air quality measures and show that six cities that were impacted early by government restrictions in response to COVID-19 show consistent declines in five of six major air pollutants compared to cities that were impacted later (the text in this post has been modified from Cadotte 2020).

One of the most pernicious and inevitable consequences of urbanization and industrialization is the release of air pollutants. The WorldHealth Organization (WHO) estimates that about 90% of urban residents experience air pollution that exceeds WHO guidelines and that air pollution is responsible for more than four million premature deaths annually (World Health Organization 2018). Air quality is adversely affected by the aerosol release of a number of chemical compounds from agriculture, manufacturing, combustion engines and garbage incineration, and is usually assessed by measuring the atmospheric concentrations of six key pollutants: fine particulate matter (PM2.5), course particulate matter (PM10), ground-level ozone (O3), nitrogen dioxide (NO2), sulfur dioxide (SO2), and carbon monoxide (CO). These pollutants have a number of serious human health impacts (Table 1). Reducing inputs of these pollutants into urban areas requires a combination of technological advancement and behaviour change that can be stimulated by governmental regulations and incentives. 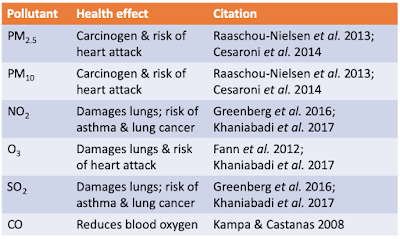 Alterations of human, transport and industrial activity are usually the result of long-term economic and behavioural change and difficult to legislate under normal situations. However, the recent emergence of the global COVID-19 pandemic has had clear epidemiological impacts with, as of March 25, 2020, almost half a million confirmed infections and close to 20,000 deaths (World Health Organization 2020). This pandemic has resulted in emergency measures attempting to reduce transmission rates that limit activity, movement and commerce in jurisdictions around the world. While these emergency measures are critically important to limit the spread and impact of the coronavirus, they also provide a glimpse into how governmental calls for behavioural change can alter air pollution levels in cities.

Early evidence reveals that pollution levels have dropped in places that have undergone COVID-19 shutdowns. As Marshall Burke showed in a blog post,  PM2.5 and PM10, levels are lower than expected in parts of China. Here I examine January and February 2020 AQI levels for the six pollutants in Wuhan to what would be expected under normal circumstances. I further compare the change in February air pollution levels over the past two years in six cities that instituted emergency measures by the end of February (early impacted cities) to 11 cities that did not declare states of emergency until March (later impacted cities) using freely available air monitoring data (World Air Quality Index Project 2020) -see Table 2 for a list of cities.

Table 2: The eleven cities used in this analysis, the month that emergency measures were enacted and two- to six-year AQI averages of the pollutants 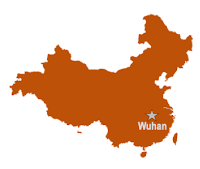 Wuhan, China was the epicenter for the December 2019 emergence and the first person-to-person spread of the novel coronavirus.  In response, authorities initiated a series drastic measures limiting human movement and activity in Wuhan and large parts of Hubei province by the end of January. Three air pollutants: PM2.5, PM10 and NO2 all showed substantial January and February declines in Air Quality Index (AQI) (U.S.Environmental Protection Agency 2014) values over 2019 levels for those months and what would be expected from long-term trends (Fig. 1). These long-term declining air pollution trends do reveal that China’s recentpollution reduction and mitigation efforts are steadily paying off, but the government-enforced restrictions further reduced pollution levels. The expected air pollution values predicted by temporal trends (red dashed lines in Fig. 1) are all substantially higher than the observed levels, with observed values being between 13.85% lower than expected for January PM2.5 and 33.93% lower for January NO2. Further, the reductions in the pollutants shown in Fig. 1 increased the number of days where pollutant concentrations were categorized as ‘good’ (0 < AQI < 50) or ‘moderate’ (51 < AQI < 100) according to the AQI. The three other pollutants: SO2, O3 and CO, all showed idiosyncratic or non-significant changes, mostly because their levels have already reduced significantly over time or appear quite variable (Fig. 2).