Contents of this post originally appeared on the Applied Ecologist, but with expanded thoughts here.

Five years ago I spent my sabbatical in China and worked closely with a lab in Guangzhou. While there, I built meaningful collaborations and friendships that have continued to advance the science I'm involved with. While in China, I accompanied my friend, Jin-tian Li to a biodiversity field experiment on contaminated post-mining lands in Hunan province, and our discussions led to the just-published paper (please e-mail me if you want a copy) in the Journal of Applied Ecology, first-authored by a former PhD student in my lab, Pu Jia.

Why do we care about degraded lands?

According to the IPBES report on land degradation, the degradation of productive lands and intact habitats is a major threat to sustainability, biodiversity and ecosystem functioning globally, which reduces the resiliency of ecological and economic systems. In many emerging economy countries, environmentally harmful practices that result in contamination render lands and habitats seriously degraded. In many circumstances, the restoration of contaminated habitats to original conditions is not an option because the capacity for these habitats to harbor intact native ecosystems is greatly compromised. In these cases, we need management options that allow us to reclaim contaminated and degraded lands (Nathanail & Bardos 2005), and preferably ones that increase biodiversity and ecosystem function (Rohr et al. 2016).

The potential role of biodiversity in reclaiming contaminated lands
While the ecological literature on the linkages between biodiversity and ecosystem function is vast and rich (e.g., Tilman, Isbell & Cowles 2014), the application of this field of research to reclaiming contaminated lands has been strangely depauperate, and so there’s little guidance on whether we should be planting diverse plant assemblages on contaminated lands, or if we ought to simply plant the most productive species or those that provide efficient phyto-removal of contaminants. This question is of fundamental importance to places like China, where rapid development and industrialization through the 1970s-1990s resulted in severe contamination of lands near mining and mineral processing facilities (Li et al. 2019), and now with China’s commitment to improving it’s environmental health, biodiversity research has the ability to impact policy and management at a national scale.
Our paper
We evaluated whether more diverse plantings increased reclamation and ecosystem functioning of a mine wasteland in Hunan Province, China, which had been severely contaminated with cadmium and zinc over decades. We sowed plots with 1-16 species and these were selected from the herbaceous species that grew around contaminated sites in the region, and more diverse assemblages produced more biomass and were more stable over time. Further, there was less heavy metal contamination of leaf tissues in the more diverse plantings, which reduces the impact on herbivores. 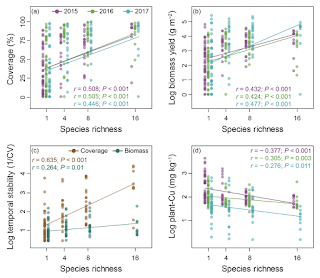 
Furthermore, the multi-species assemblages also performed better because these high diversity treatments harboured fewer soil fungal pathogens (and by extension more beneficial soil fungi). This appeared to be driven by the fact that high plant diversity supported a greater diversity of soil chitinolytic bacteria that produce anti-fungal enzymes that degrade the chitin in cell walls of soil-borne plant-pathogenic fungi.

In the search for efficient ways to reclaim contaminated lands, sowing high-diversity plant assemblages appear to be an effective tool. The key for reclamation is to ensure that soil processes like decomposition and nutrient cycling are able to support a self-sustaining ecosystem, and higher plant diversity can ensure this. The next steps will be to field test this in real reclamation projects and to see this research work its way into best practices.