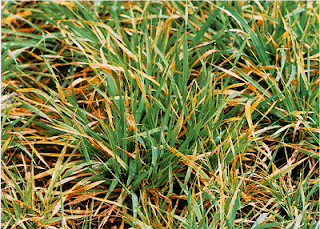 Managing plant disease is a major part modern agricultural practice, so it is important to understand the basic ecological dynamics of plant diseases. Some theoretical studies have found that the prevalence of plant diseases can be affected by the amount of herbivory in a system. Given that human land-use and the removal of top predators from many ecosystems has fundamentally changed the abundance and distribution of many herbivores, the repercussions of herbivory can have important cascading consequences throughout foodwebs –including disease dynamics. In the first experimental study of the interaction between herbivory and plant disease, the forthcoming paper in PNAS by Elizabeth Borer and colleagues, shows that increased exposure to large herbivores (e.g., mule deer) resulted in higher disease prevalence in the plant community. The disease they studied, barley and cereal yellow dwarf virus (shown in the photo), is transmitted by aphids, so herbivory does not cause increased transfer. Rather, herbivores changed community composition resulting in higher abundances of very susceptible species, creating a feedback where higher abundances resulted in higher infection rates due to a larger pool of potential hosts near by. These results are important for two reasons. First, this particular virus is an important agricultural disease. Secondly, we need to take a whole-community approach to understanding disease dynamics because these dynamics are not only a property of host-vector-pathogen interactions, but are subject to direct and indirect effects from interactions with other community members.