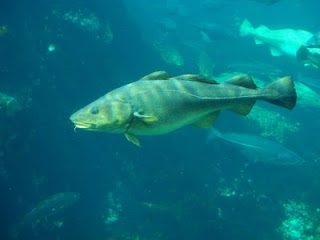 The collapse of cod fisheries around the world is a breathtaking example of over exploitation and poor planning. But with reduced fishing pressure why have cod populations shown such slow or stagnant population recovery? This has been an extremely active area of research for fisheries scientists. In a recent paper by Casini and colleagues in the Proceedings of the National Academy of Sciences, they found that over-fishing of cod in the Baltic Sea has led to a regime shift, where a small planktivorous fish called sprat now dominate the system. But its not just that there is a new dominant, sprat seem to really change how the ecosystem operates, to the detriment of cod recovery. When the ecosystem was cod dominated, zooplankton abundance was unrelated to sprat abundance but did appear to be dependent on hydrological environmental variables. In the new sprat-dominated system zooplankton numbers are negatively related to sprat abundance and the environmental controls of zooplankton abundance do not appear to be important. So why is this bad for cod recovery? Adult sprat compete with larval and juvenile cod for zooplankton and sprat consume cod eggs. The authors suggest that a good cod recovery plan will involve managing key aspects of the food web. This paper reveals how a whole food web or ecosystem approach is necessary for understanding population controls of important fisheries species.

Welcome to the blogosphere! It's nice to see fellow ecologists here. (My own ecoblog, Perceiving Wholes, has been shamefully dormant, but that's grad school.) I've added you to my blogroll and hope to come here often.