Predator-human conflict: the emergence of a primordial fear?

There is something terrifying and at the same time captivating about the idea of a large, wild, mysterious predator. The very idea that a large predator is near by makes us feel vulnerable. Every year, news stories about wild animal attacks appear in numerous publications and on many television shows. Human death at the fangs or claws of a wild beast is at the heart of many legendary stories and probably sown into the fabric of our being by millennia of ever present risk from large predators. This characteristic of our human experience, I think, dictates our response to animal attacks. Stories of animal attacks are usually concluded with statements about having or attempting to track down and destroy the guilty animal. 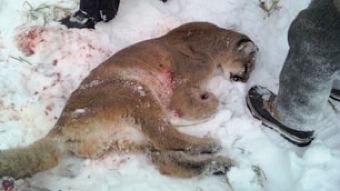 Such is the case for three recent animal attacks in Canada. In late October, 2009 in Nova Scotia, a raising 19-year old folk singer was killed by a couple of coyotes while hiking. It is difficult to find meaning in such a horrendous death, but the narrative, told by reporters, was essentially to rest assured that one of the coyotes had been killed and the other was being tracked and would be destroyed. There were two cougar attacks in early January, 2010 in British Columbia, that basically ended with the same reassurance. In the first, a boy was attacked and his pet golden retriever courageously saved his life. A police officer arrived a shot the cougar which was mauling the dog -an obviously legitimate response, and the news story again reassures us that the animal was destroyed. And don't worry the hero dog survived. In the second cougar attack, another boy was attacked, and this time his mother saved his life. But again the story narrative ended by reassuring us that the guilty cougar, and another cat for good measure, were destroyed the next day.

After reading these stories, I asked myself two things. Why is our response to destroy predators that attack? And why do we need to be reassured that this has happened? In defence of the predators, they are just doing what their instincts tell them to do, and most often their only mistake is that they selected their prey poorly. But the reality is that there are only 2-4 cougar attacks per year and only 18 fatalities over the past 100 years. Why do we fear such a low probability event? In contrast, automobile accidents are the leading cause of death in children under 12 in North America. Thousands of people die, and millions injured in car accidents every year in North America. Recently, in Toronto, were I live, 10 pedestrians were killed in 10 days, yet my heart doesn't race when I cross a street. If our fears and responses to human injury and death reflected the actual major risks, we would invoke restrictive rules regarding automobile use.

We believe that we can live with nature in our backyard. But when that close contact results in an animal attack, human fear seems to dictate an irrational response. Do we really expect predators to obey our rules? Can we punish them enough to effectively tame them? We cannot, and I hope that our approaches to dealing with human-animal conflict can better deal with animal attacks, in a way that does not subjugate large predators to whims of our fears.

Maybe this has something to do with the "an eye for an eye" principle that inhabits the mind of many. Although, nobody died in the recent cougar cases. I'm surprise that this happens in Canada. To me it is like a death penalty (still in practice in some countries), but without going to the cort.
Here in Brazil this also happens, but sometimes the animal does not even have to attack. In some regions they are killed just because they might be dangerous. In others, it is simply a cultural habit.
Anyway, it's an interesting reflection (as always, Marc!).

Thanks Tadeu,
'Eye for an eye' justice is a great context for this type of response.
Marc

The answers to your questions, particularly the first one, are very simple, I think. Why do we destroy predators that attack? This is what any animal in our position, as a thinking animal with the capability to do it, would do. It is what people in Africa, who are intimately connected with nature, have been doing for thousands of years. It is a purely rational decision in favor of our species. The only reason not to destroy the predator would be on the basis of aesthetics, or some idea of a resultant loss or change in the ecosystem. The latter would only hold if the predator was in danger of extinction locally or globally, not the case with any of the species and places involved here. The rationality of the decision is further upheld by the fact that many individual predators that attack humans once will do so again. This is not surprising considering we are so abundant as well as easy prey, and the same pattern is true for cattle etc. I would argue that confounding aesthetics (or in cases of the more devout animal rights activists, rights) with ecological concern will not gain any friends for conservation among the public.

Many irrational animal fears need to be countered, and should be, but once you have an individual predator that is not endangered attacking humans, the situation changes. To argue otherwise is to undermine credibility and reinforce the stereotype of conservationists being anti-human.

Thanks for your comment Bob, surely a controversial issue. I think that the 'once a human attacker, forever a human attacker' is an interesting empirical issue, which for most animal attacks can never actually be verified -most are killed (in North America anyway) and we have legendary stories about Man-killing lions (rogue males without hunting prides).

As thinking animals, I would counter, that the responsibility is with us to better manage human-nature conflicts. We are the ones who make conscious decisions about where and how to live. I don't see that as anti-human (a weird, self-loathing phrase), just as trying to make the best decisions while balancing multiple competing interests. I hope people wouldn't be pegged as pro-volcano and anti-human if they suggested people refrain from building homes at the base of a volncano.

It's certainly true that we need to make better decisions about development to minimize these kind of encounters. However, that doesn't mean the response to these killings was wrong. The analogy to the volcano is false. If people could plug up volcanoes, they most certainly would. If you were against plugging them up because of some concern about the continued existence of volcanoes, then yes, you would be labeled pro-volcano and anti-human. Anti-human is not a self-loathing phrase, it is a pejorative term thrown by those who see themselves on the side of humans against something. If you believed that a common species like a coyote who killed someone should be left alone, then that might be interpreted as self-loathing. I agree that the repeated killing tendency needs to be critically evaluated for each species, but I think it is pretty well established for some predators like lions and tigers (e.g. check out Man-eaters of Kumaon by Jim Corbett, not the science lit but pretty compelling). Obviously it is not likely for other species like rattlesnakes, which might be more comparable with a non-sentient volcano.

p.s. - The Lions of Tsavo is also an interesting book that relates to this issue.

There is something terrifying and at the same time captivating about the idea of a large, wild, mysterious predator

People when they start to fear. They start to do something really awful. I hope that they don't start to hunt it.