Niche or Neutral? Why size matters.

Metacommunity dynamics (i.e. the effects of dispersal among connected communities) have become an increasingly common lens through which to explain community structure. For example, competition-colonization models explain the coexistence of superior and inferior competitors as the result of a trade-off in colonization and competitive ability. Species are either superior competitors, with high probabilities of establishing in patches, but low ability to move between patches, or superior colonizers, which have tend to lose in competitive interactions but can travel easily between patches. Under this framework, the ability of superior colonizers to reach and maintain populations in patches where their superior competitors are absent allows them to avoid extinction.

One problem with these types of models is that they rarely acknowledge the importance of ecological drift – that is, that chance events also affect species interactions. This despite the fact that we know that in “real life”, chance events likely play a major role in producing assemblages different than those we might predict based on theory. One of the strengths of the Hubbell’s neutral model is that it recognizes and embraces the importance of randomness.

A recent paper by Orrock and Watling (2010) examines how chance events can alter the predictions of the classic competition-colonization model. Orrock and Watling show that the size of communities in a metacommunity (which is assumed to correlate with the strength of ecological drift) determines whether community dynamics are niche-structured or neutral in nature. In large communities, predictions agree closely with those of the classic competition-colonization model, and niche-based interactions (i.e. competitive hierarchies) dominate. It’s in small communities that things get interesting: ecological drift becomes more important, so that differences in competitive ability between species are effectively neutralized. As a result, small communities begin to resemble neutral assemblages in which species abundances don’t relate to differences in competitive ability. An interesting consequence of this outcome is that species who are poor competitors but good colonizers have an additional refuge – simply by escaping to small communities, even if these communities contain superior competitors, they can persist in a metacommunity.

e what really matter. Habitat destruction and fragmentation are an growing problem due to human activities. Habitat patches are often smaller, and of lower quality, decreasing the size of the community each patch can support. Even if these patches are still connected and functioning as a metacommunity, species which rely on their strong competitive ability for persistence will lose this advantage as assemblages become increasingly neutral. Under this model, community diversity declines even more as habitat is lost than in the traditional competition-colonization model, and superior competitors face even greater extinction risk than previously predicted.

Since in reality, metacommunities are likely to consist of patches of different sizes, rather than all large or all small patches, the predictions here remain to be extended to more realistic metacommunities. However, Orrock and Watling have produced a useful model for understanding how ecological drift can affect diversity in a metacommunity and alter the expectations of traditional competition-colonization models.

Teaching a quoll that cane toads are bad

Often, species become endangered because of multiple stressors, with habitat destruction taking the prize as the most egregious. However, often what pushes a species into extinction is not the main driver of endangerment. For example, passenger pigeon numbers

were decimated by unabated hunting, but the proximate cause of extinction was likely an inability to thrive in low densities. Yet, seldom is the case where a known single species interaction is the primary cause of engangerment and maybe extinction. The northern quoll, Dasyurus hallucatus, is an endangered marsupial predator in Australia. The current major threat to the northern quoll is the invasion of toxic can toads. Quolls, being predators of small mammals, birds, reptiles and amphibians, readily attacks cane toads, which are toxic to quolls. Quoll populations have disappeared from areas invaded by cane toads, and extinction seems almost inevitable.

Given that the spread of cane toads into the remaining quoll habitats is inevitable, research, led by Stephanie O'donnell in Richard Shine's lab at the University of Sydney and published in the Journal of Applied Ecology, is underway to train quoll's to avoid cane toads. These researchers feed a subset of captive quolls dead toads laced with thiabendazole, a chemical that induces nausea. They then fitted individuals with radio collars and released these toad-smart quolls as well as toad naive ones. Some toad-naive quolls died quickly, after attacking cane toads. Only 58% of male naive quolls survived, while 88% of toad-smart males survived. While females seemed less likely to attack toads, 84% of naive females survived and 94% of toad-smart females survived!

See the video of a toad-smart quoll deciding not to eat a cane toad, its pretty cool.

In order to promote the persistence and possible spread of extremely rare plant species, ecologists need to know why a species is rare in the first place. In 1986, Deborah Rabinowitz identified seven forms of rarity, where rarity could mean several things depending on range size, habitat specificity and population sizes. When considering rarity, it often feels intuitive to look for environmental causes for these different forms of rarity. Habitat alteration is an obvious environmental change that affects abundance and distribution, but are rare species generally limited by habitat or resource availability? The alternative cause of rarity could just be that sufficient habitat exists, but that the rare species is simply unable to find or disperse to other sites. An extreme example of this would be the Devil's Hole pupfish which exists at only a single pool. It can survive elsewhere (such as in artificial tanks) but natural dispersal is impossible as its pool is in a desert. 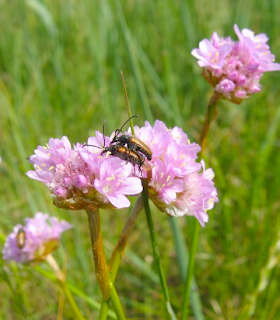 Photo taken by Kristian Peters and available through GNU free documentation license
In a recent paper by Birgit Seifert and Markus Fischer in Biological Conservation, they examine whether an endangered plant, Armeria maritima subsp. elongata, was limited because of a lack of habitats or if it was dispersal limited. They collected seeds from eight populations and experimentally added these seeds to their original populations and to uninhabited, but apparently appropriate sites. They found that seeds germinated equally well in inhabited and uninhabited sites and seedlings had similar survivorships. They found that variation in germination rates were likely caused by originating population size and that low genetic diversity and inbreeding reduce viability.

These results reinforce two things. First is that conserving species may only require specific activities, such as collect and distributing seeds. Here ideas like assisted migration seem like valuable conservation strategies. Secondly, we really need to be doing these simple experiments to better understand why species are rare. If we fail to understand the causes of rarity, we may be wasting valuable resources when try to protect rare species.