The evolutionary story of ecosystem function

Twenty years of research has repeatedly shown that communities with greater diversity result higher functioning -namely greater production of biomass. One of the major mechanisms producing this relationship is that different species use differing resources, such that their complementary use of resources uses the total resource pool more thoroughly, thus converting more resources into biomass. Resource preference is the product of evolution and how organisms have adapted to using various resources can influence the strength of the diversity-function.

In a recent paper in Nature, Dominique Gravel and colleagues test how the evolution of specialization versus general resource use affect the strength of the diversity-function relationship. They use bacteria strains that have undergone evolution on diverse resources (generalist) versus on a singular resource (specialist). The resources in their case are different carbon substrates. 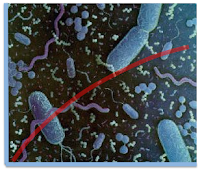 Assemblages of generalists were able to use many available resources and generally had greater productivity than specialist assemblages. Generalists also show an increasing relationship between diversity and productivity, because no generalist used all resources and they still showed some preferences. Combining multiple such generalists meant that more of the total resource pool was consumed. Specialists also resulted in the positive relationship, but a much steeper one. Because specialist use many fewer carbon substrates, additional specialists meant that new resources were tapped into. Thus increasing specialist diversity resulted in more new resources being consumed than with the generalist species.

While these results are logical, they are important for two reasons. First is that the strength of the relationship between diversity and function is mechanistically determined by the resource use efficiency of individual strains, and how many of the total substrates they can use. The mechanisms producing different relationships in previous experiments were hypothesized after the results analyzed, as opposed to being predicted. Second, recent work has shown that evolutionary history seems to be a better explanation of community function than the number of species. These results show how the history of evolution can have important consequences for function.

I like how it all resembles fractals, nature, life and the universe is all about fractals, once that we understand this concept, we can understand the laws of all.

It is such an interesting topic, there are things that I think in this lifetime we will never going to understand.