The reality of publishing papers

This is in response to my undergrads, who ask me "Have you published any of the stuff we're working on yet?" practically every week. To which my response invariably is "not yet". 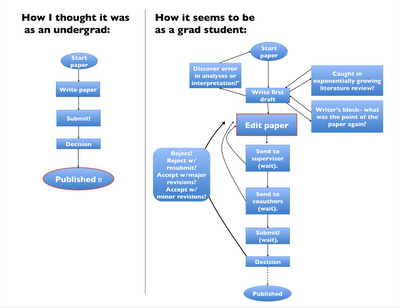 Metacommunity data and theory: the tortoise and the hare

Empirical approaches to metacommunities: a review and comparison with theory
Logue et al. 2011

The recognition that community composition is a function of both local and regional-scale processes, meaning that a community cannot be understood in isolation from the network of communities with which it interacts, is the fundamental idea behind metacommunity ecology. In a relatively short period of time, metacommunity ecology has integrated concepts from spatial ecology, metapopulation ecology, and community ecology with novel ideas, and developed a strong body of theory. However, metacommunity theory has advanced much more rapidly than empirical tests of that theory. In an interesting review in TREE, Logue et al. examine whether empirical data needs to catch up with the pace of theory development, or whether theory is moving too fast to incorporate the information available from empirical data. 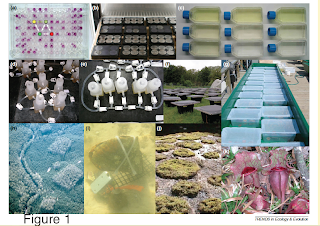 The types of systems used in the 34 experimental and 74 observational studies that Logue et al. found were very limited – the most common experimental approach involved setting up aquatic microcosms of unicellular organisms.* Observational studies similarly tested microorganisms, usually in aquatic systems. The organisms so beloved in the rest of community ecology (plants? vertebrates?) barely feature. Most studies focus on aquatic systems composed of multiple patches (such as microcosms, ponds, pitcher plant communities) because systems with discrete boundaries are more amenable to testing current theory. However, natural systems are rarely configured into a clear “patch” versus “matrix” dichotomy. Instead they are complex and heterogeneous, and may lack clear boundaries.

Dynamics in metacommunities are generally described using four dominant paradigms: mass-effects, species sorting, neutral perspective, or patch-dynamics. These paradigms reflect the most important processes structuring communities, that is, either dispersal between communities, environmental differences between communities, dynamics driven by the tenets of neutral theory, or extinction and colonization, respectively. Strikingly, experimental studies mostly tested for mass-effects or patch dynamics, and observational studies mostly tested for species-sorting and mass effects paradigms. The neutral paradigm was rarely tested in any type of study. Logue et al. found that many studies had difficulty designing experiments that tested for evidence of specific paradigms, because natural communities are much more complex than the simple paradigms suggest. Most studies that did test for evidence of particular paradigms found evidence for multiple paradigms or had difficulty disentangling different mechanisms.

The metacommunity theory that has developed in the last five years is among the most exciting and interesting work in ecology. However, the slower pace of experimental work means that theory has developed with little feedback. For example, Logue et al. make a strong argument that the results from these studies suggest that it is time to integrate the four-paradigm system into a single, comprehensive framework (see figure). Theory is only valuable if it’s useful - this paper is an important reminder that there is an important feedback loop between theory and data, and successful science requires input from both.

*Important disclaimer: at this very moment I'm running aquatic microcosms of microscopic protists in the lab. We all have room for improvment. :)
Posted by Caroline Tucker at 6/15/2011 02:37:00 PM 4 comments:

Navjot Sodhi, conservation for all

I opened my e-mail to see the shocking and saddening news that Navjot Sodhi passed away yesterday (see here for more details). He was an absolute leader in tropical conservation biology from his base in Singapore. But more than this he made conservation biology accessible to the public and especially to those working on the front lines trying to protect biodiversity. His free edited book: 'Conservation Biology for All' set a new milestone in conservation biology and in the efforts of academics to step out of the ivory tower and reach out to broader communities.
Posted by Marc Cadotte at 6/13/2011 09:21:00 AM 2 comments: