The contrasting effects of habitat area and heterogeneity on diversity

“How extremely stupid not to have thought of that!” (Thomas H. Huxley, commenting on the obviousness of Darwin’s theory of natural selection)

Sometimes I read a paper and Huxley’s famous quote seems exceedingly appropriate. Why I say this is that a new idea or concept is presented which seems both so simple and at the same time a potentially powerful explanation of patterns in nature. This was my reaction to a recent paper from Omri Allouche and colleagues published in the Proceedings ofthe National Academy of Science. The paper presents a simple conceptual model, in the same vein as Connell’s classic intermediate disturbance hypothesis, which accounts for large-scale diversity patterns based on aspects of species niche requirements as well as classic stochastic theory. Merging these two aspects is a critical step forward, as in ecology, there has been a tension in explaining diversity patterns between niche-based processes requiring that species exhibit differences in their needs, and stochastic (or neutral) explanations that ignore these differences, but seem to do well at large scales.

They tested this exceedingly simple prediction using European bird data and found that species richness was maximized at intermediate heterogeneity (measured by the variation in elevation). Further, when they classified species into different niche width classes, they found that the relationship between richness and heterogeneity changed was predicted (i.e., strongest for intermediate breadth). 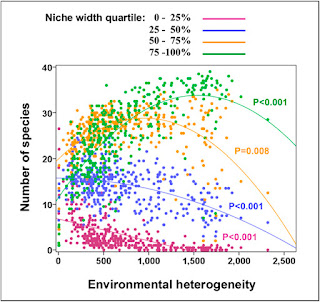 This is a great paper and should have a large impact. It will be exciting to see what other systems fit this pattern and how specific studies later the interpretation or mechanisms in this model.

Undoubtedly, readers of this blog have: a) published in an open access (OA) journal; b) debated the merits of an OA journal; and/or c) received spam from shady, predatory OA journals (I know when my grad students have 'made it' when they tell me they got an e-mail invite to submit to the Open Journal of the Latest Research Keyword). Now that we have had OA journals operating for several years, it is a good time to ask about their meaningfulness for research and researchers. Bob O'Hara has recently published an excellent reflection on OA in the Guardian newspaper, and it deserves to be read and discussed. Find it here.
Posted by Marc Cadotte at 10/26/2012 10:45:00 AM No comments:

I'll try for a more content-full blog post in the near future, but I couldn't help noticing that there are a number of papers in my reader this month with amusing titles. Titles are always one of the most difficult parts of writing a paper - how do you capture the important aspects of your paper in a minimum of words, while avoiding the usual traps of colons, question marks, and cliches (not to mention the urge to throw in buzzwords)? For that reason, I always appreciate authors willing to be a little intriguing, whether with metaphors, puns, or clever references.

(As an anecdote, I was in a reading group a week ago where we were discussing a paper about turtle movements. People couldn't stop making Ninja Turtle jokes throughout the meeting (academics are cool like that), and I'll admit I had a moment of jealousy over people who work with charismatic creatures which lend themselves to amusing references in papers and talks. There aren't too many jokes about computer models.)

Some amusing titles in the last month or two:

Taxonomy versus phylogeny: evolutionary history of marsh rabbits without hopping to conclusions

Declining woodland birds in North America: should we blame Bambi? 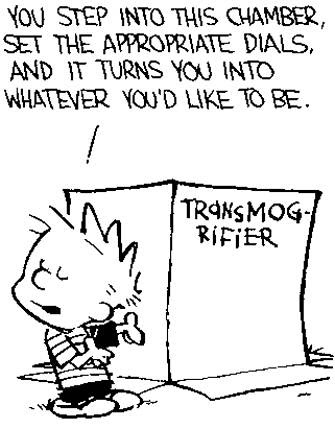 Although this study suggests that a clever titles will get cited less, I am at least more likely to read the abstract...

There are lots of classic titles I've overlooked, feel free to add them to the comments.