Academic ambivalence: why do we want to join the academic pipeline?

(This is inspired by a few related posts, and the ongoing discussion in the comments and elsewhere...
http://deepseanews.com/2013/02/19294/)

At the foundations of the University is the concept of academic freedom, unhindered exploration. At their best, universities are reservoirs for society’s brightest and most creative thinkers, people who might not otherwise have the opportunity to explore their intellectual potential. Despite the worst things we might say about academia, it is a place with unmatched room for the exploration. And as a result, academic positions are in constant demand from bright, thoughtful people.

As every grad student learns, academia’s popularity greatly outstrips the availability of research funding and academic positions. Last year there was a string of articles declaiming graduate school as a mistake, a pyramid scam, and an institution in drastic need of rethinking. It’s also a place where students interact with like-minded peers for possibly the first time, succeed or fail at independent research, and experience more responsibility for their own success than many full-time employees ever will. Depending on who you listen to, it will be the best, or the worst, experience of your life.

And then there are tenure track positions. These are the holy grail of the academic pipeline. Advertised positions in ecology often get more than 100 applications for a single job. And yet everyone knows that these jobs are accompanied by a list of problems. They are unremittingly--exhaustingly--competitive, and for that reason, they are associated with long working hours and no concept of “overtime”. The frequent moves between universities mean that relationships can be strained or disrupted, the long hours make family life complicated, and women faculty especially face balancing pregnancy and childrearing with academic demands.

And yet. Hundreds of applicants for every position. So this is the ambivalence about academia: is it one of the best jobs in the world or the worst ones? An (admittedly ridiculous) article in Forbes about how faculty jobs are among the least stressful received rapid condemnation. But this must be reconciled against the fact that many professors choose to remain active years after retirement, and that faculty jobs are often ranked among the most fulfilling.

One consequence of this system of concurrent reward and punishment, with its supply of many similarly-talented people and stochastic element, is a strange culture of competitive martyrship. This shows up in many subtle and less-subtle ways on job boards, in personal conversations, on panels and discussions, in the comments on blog posts. The funniest example I’ve experienced was the comment from a grizzled prof that having a dog would decrease my publication output by one paper a year (I can’t imagine how much a baby would set it back). The saddest examples are people who emphasize that they work 12, 14, 16 hours a day, at the cost of seeing their children and/or spouses. These statements are always made with the confidence that this is the necessary sacrifice for success, that people not willing to give up on balance and hobbies and everything else in life are deserving (or at least risking) failure. The people who make these claims are survivors of the academic arms race. They found one strategy (immense hard work combined with talent) that got them through. But this can create the attitude that those not able or willing to sacrifice aren’t deserving of a position – rather than that the position may demand too much of people.

Such people also tend to be more vocal than other survivors of this arms race who had more success balancing the personal and professional. If you are lucky as a grad student, you know some faculty members who had families, hobbies, personal interests, and managed to be successful academics. This suggests that the dichotomy between personal and professional success is not absolutely necessary.

What we really need is less rhetoric and more open debate about what is acceptable and what is appropriate in academia, and how to shift the culture to be aligned with this. This is difficult, but also not impossible. For example, departments can decide that they want to encourage a particular atmosphere within the department. For example, EEB here at the University of Toronto has decided that they want to support families: as a result, there is a move to provide some maternity funding for graduate students, and provide income for faculty on maternity leave to hire a postdoc during this time. The hope is that this postdoc will help reduce the publication gap that having children can cause by maintaining research activities, while also providing support to current undergraduate and graduate students. Obviously this is only a drop in the bucket. But what matters is that we recognize that academia combines both good and bad, and merely selecting for those people who can survive the bad isn’t optimal. Instead, we can try to make academia a place where the best people can thrive. In this I am, and hope to remain, an idealist. 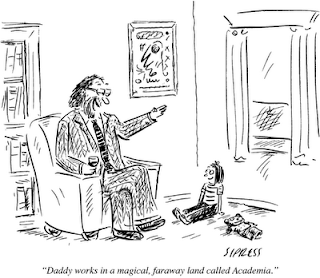 Perhaps instead of calling it 'academia' as a career, we call it "research'? Academia seems like a mystical thing, while research is something that you do. So instead of being an academic, you're an academic researcher.

I thought about this a little bit when writing the post, and I think that "academia" is more precise: research is only one aspect of a faculty position. Teaching, supervising grad students, and service also play a role in why the position is as good and frustrating as it is.

Great post Caroline. I'll have a link and some comments up at Dynamic Ecology on Friday. But briefly, I'd say: I think some selection for workaholics is pretty much inevitable. And on the larger issue of why so many people are so willing to chase so few tenure track positions in academia, I'd say it's at least in part because the alternatives are also long shots, or are unattractive on salary and other grounds.

Thanks Jeremy. I think for many of us, we can't see ourselves doing anything else. I don't know if that is a good or bad thing :-\

Nice post Caroline. Fully agree that we can do more to make academia inclusive and supportive, and that doing so will not only make for a nicer place to work, but will advance the goals of the institution. Wrote some related thoughts a few days ago here: http://wp.me/1Fh0T

I've read Kevin's post shortly after he wrote it, and have been watching the 'fall out' since. Thanks for your excellent post, Caroline. IMO, you've distilled the discourse the best.

I agree, academia is distinct from research. But the source of disillusion isn't trying to find an 'academic' job, but trying to find a faculty research/teaching job at a research university or some other research institution. (For example, community college professors are academics, by definition.)

I love doing what I do immensely, and I can't see myself doing anything else, and I recognize that I'm lucky to be in such a position.

Lengthier comments now up over at Dynamic Ecology: http://t.co/GYpfegLxqG