Closely related animal species are often so similar that it is hard to distinguish them. This immediately leads to the question of how the individuals of such species, when in sympatry, can recognize their conspecifics. Usually, the species differ in traits (i.e., species recognition signals; e.g., visual and sound signals) that are detectable by sensory mechanisms. Less is known, however, about how these phenotypic differences evolve. A common view is that hybrids suffer reduced fitness or cannot be produced whatsoever, and therefore selection should favor individuals with traits that avoid interspecific matings. By diverging in such traits, females and males of closely related species are less likely to waste energy in failed matings. This widely accepted assumption is usually referred to as “reproductive character displacement” (Losos, 2013).

While it is generally accepted that natural selection is the force increasing the frequency of the divergent traits, whether or not the resulting divergence is driven by the interaction between the two species (e.g., competition) remains uncertain. If a pattern of differences is consistently detected between populations of two closely related species when they are compared in allopatry versus sympatry, it seems reasonable to attribute this pattern to the interaction of both species. However, a number of processes other than a response to interspecific interaction may result in a “displacement-like” pattern—substantial differences of the environments between allopatry and sympatry, phenotypic plasticity or even random processes can all trigger differentiation (Kamath, 2014).

Despite the concept of character displacement having remained in the evolutionary literature for decades, this assumption has seldom been subjected to critical scrutiny. Indeed, it was not until recently that significant progress in designing thorough studies to rigorously test this adaptive hypothesis was achieved (e.g., Stuart et al. [2014]). 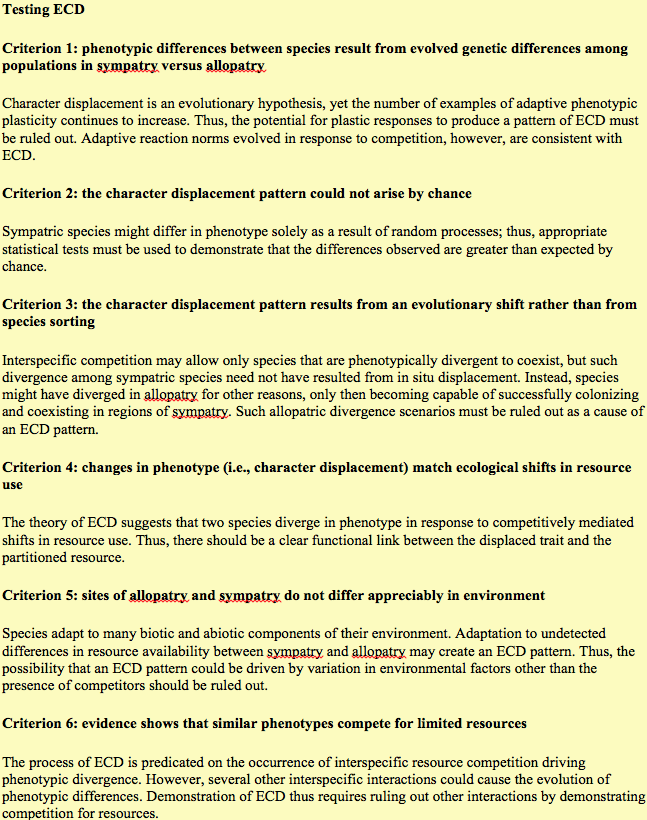 A blog post reviewing Stuart and Losos (2013) from a different perspective:

Glad you liked it!