The removal of the predatory journal list means the loss of necessary information for scholars.

We at EEB & Flow periodically post about trends and issues in scholarly publishing, and one issue that we keep coming back to is the existence of predatory Open Access journals. These are journals that abuse a valid publishing model to make a quick buck and use standards that are clearly substandard and are meant to subvert the normal scholarly publishing pipeline (for example, see: here, here and here). In identifying those journals that, though their publishing model and activities, are predatory, we have relied heavily on Beall's list of predatory journals. This list was created by Jeffrey Beall, with the goal of providing scholars with the necessary information needed to make informed decisions about which journals to publish in and to avoid those that likely take advantage of authors.

As of a few days ago, the predatory journal list has been taken down and is no longer available online. Rumour has it that Jeffrey Beall removed the list in response to threats of lawsuits. This is really unfortunate, and I hope that someone who is dedicated to scholarly publishing will assume the mantle.

However, for those who still wish to consult the list, an archive of the list still exists online -found here.
Posted by Unknown at 1/24/2017 02:16:00 PM No comments: Links to this post

True, False, or Neither? Hypothesis testing in ecology.

How science is done is the outcome of many things, from training (both institutional and lab specific), reviewers’ critiques and requests, historical practices, subdiscipline culture and paradigms, to practicalities such as time, money, and trends in grant awards. ‘Ecology’ is the emergent property of thousands of people pursuing paths driven by their own combination of these and other motivators. Not surprisingly, the path of ecology sways and stalls, and in response papers pop up continuing the decades old discussion about philosophy and best practices for ecological research.

A new paper from Betini et al. in the Royal Society Open Science contributes to this discussion by asking why ecologists don’t test multiple competing hypotheses (allowing efficient falsification or “strong inference” a la Popper). Ecologists rarely test multiple competing hypothesis test: Betini et al. found that only 21 of 100 randomly selected papers tested 2 hypotheses, and only 8 tested greater than 2. Multiple hypothesis testing is a key component of strong inference, and the authors hearken to Platt’s 1964 paper “Strong Inference” as to why ecologists should be adopting adopt strong inference.

From Platt: “Science is now an everyday business. Equipment, calculations, lectures become ends in themselves. How many of us write down our alternatives and crucial experiments every day, focusing on the exclusion of a hypothesis? We may write our scientific papers so that it looks as if we had steps 1, 2, and 3 in mind all along. But in between, we do busywork. We become "method-oriented" rather than "problem-oriented." We say we prefer to "feel our way" toward generalizations.”

[An aside to say that Platt was a brutally honest critic of the state of science and his grumpy complaints would not be out of place today. This makes reading his 1964 paper especially fun. E.g. “We can see from the external symptoms that there is something scientifically wrong. The Frozen Method. The Eternal Surveyor. The Never Finished. The Great Man With a Single Hypothesis. The Little Club of Dependents. The Vendetta. The All-Encompassing Theory Which Can Never Be Falsified.”]

Betini et al. list a number of common practical intellectual and practical biases that likely prevent researchers from using multiple hypothesis testing and strong inference. These range from confirmation bias and pattern-seeking to the fallacy of factorial design (which leads to unreasonably high replication requirements including of uninformative combinations). But the authors are surprisingly unquestioning about the utility of strong inference and multiple hypothesis testing for ecology. For example, Brian McGill has a great post highlighting the importance and difficulties of multi-causality in ecology - many non-trivial processes drive ecological systems (see also).

Another salient point is that falsification of hypotheses, which is central to strong inference, is especially unserviceable in ecology. There are many reasons that an experimental result could be negative and yet not result in falsification of a hypothesis. Data may be faulty in many ways outside of our control, due to inappropriate scales of analyses, or because of limitations of human perception and technology. The data may be incomplete (for example, from a community that has not reached equilibrium); it may rely inappropriately on proxies, or there could be key variables that are difficult to control (see John A. Wiens' chapter for details). Even in highly controlled microcosms, variation arises and failures occur that are 'inexplicable' given our current ability to perceive and control the system.

Or the data might be accurate but there are statistical issues to be concerned about, given many effect sizes are small and replication can be difficult or limited. Other statistical issues can also make falsification questionable – for example, the use of p-values as the ‘falsify/don’t falsify’ determinant, or the confounding of AIC model selection with true multiple hypothesis testing.
Instead, I think it can be argued that ecologists have relied more on verification – accumulating multiple results supporting a hypothesis. This is slower, logically weaker, and undoubtedly results in mistakes too. Verification is most convincing when effect sizes are large – e.g. David Schindler’s lake 226, which provided a single and principal example of phosphorus supplementation causing eutrophication. Unfortunately small effect sizes are common in ecology. There also isn’t a clear process for dealing with negative results when a field has relied on verification - how much negative evidence is required to remove a hypothesis from use, versus just lead to caveats or modifications?

Perhaps one reason Bayesian methods are so attractive to many ecologists is that they reflect the modified approach we already use - developing priors based on our assessment of evidence in the literature, particularly verifications but also evidence that falsifies (for a better discussion of this mixed approach, see Andrew Gelman's writing). This is exactly where Betini et al.'s paper is especially relevant – intellectual biases and practical limitations are even more important outside of the strict rules of strong inference. It seems important as ecologists to address these biases as much as possible. In particular, better training in philosophical, ethical and methodological practices; priors, which may frequently be amorphous and internal, should be externalized using meta-analyses and reviews that express the state of knowledge in unbiased fashion; and we should strive to formulate hypotheses that are specific and to identify the implicit assumptions.
Posted by Caroline Tucker at 1/20/2017 03:50:00 AM 7 comments: Links to this post

87 years ago, in ecology

Louis Emberger was an important French plant ecologist in the first half of the last century, known for his work on the assemblages of plants in the mediterranean.

For example, the plot below is his published diagram showing minimum temperature of the coolest month versus a 'pluviometric quotient' capturing several aspects of temperature and precipitation from:

Note this wasn't an unappreciated or ignored paper - it received a couple hundred citations, up until present day. Further, updated versions have appeared in more recent years (see bottom).

So it's fascinating to see the eraser marks and crossed out lines, this visualisation of scientific uncertainty. The final message from this probably depends on your perspective and personality:
It's certainly a reminder of how lucky we are to have modern graphical software :) 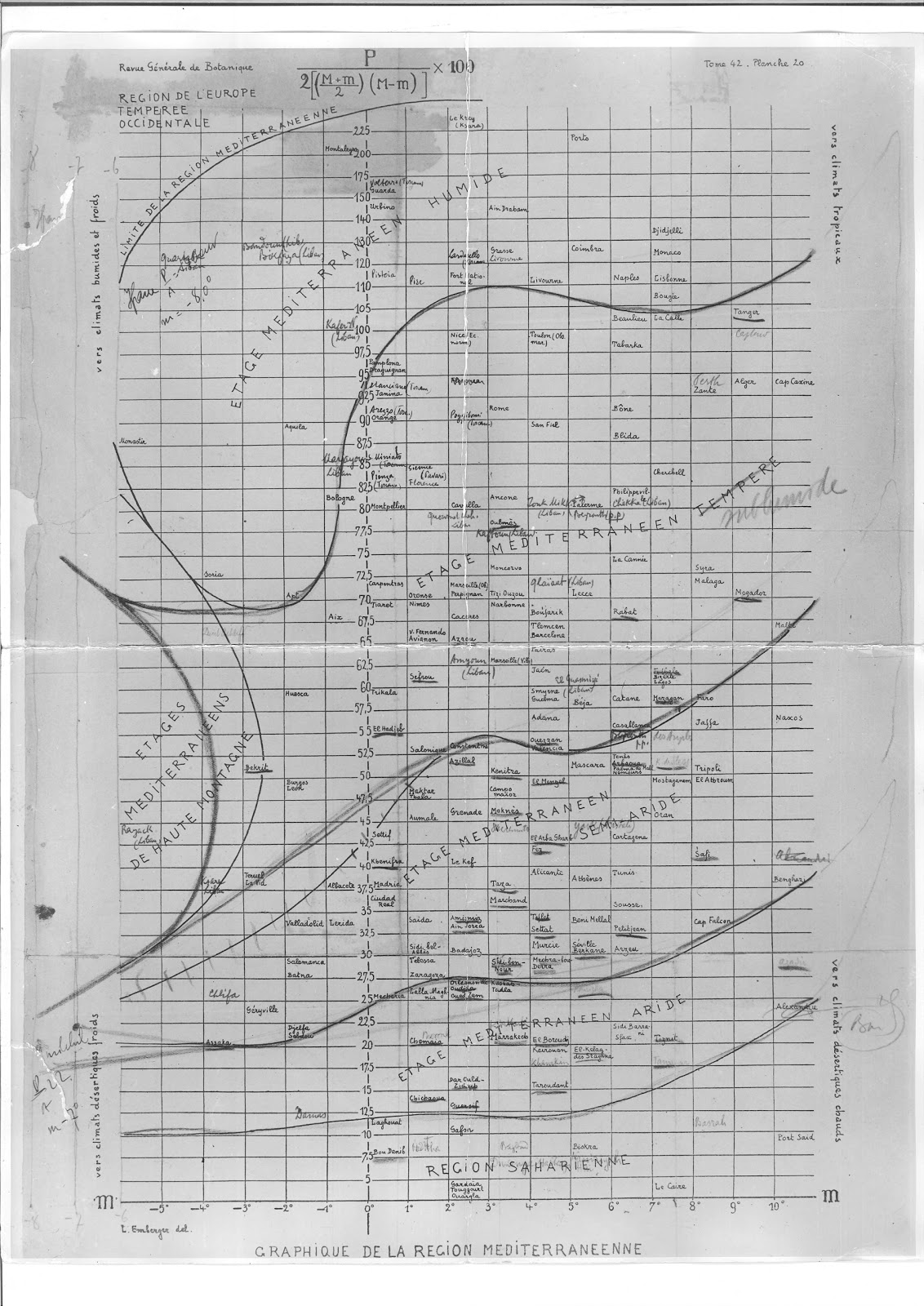 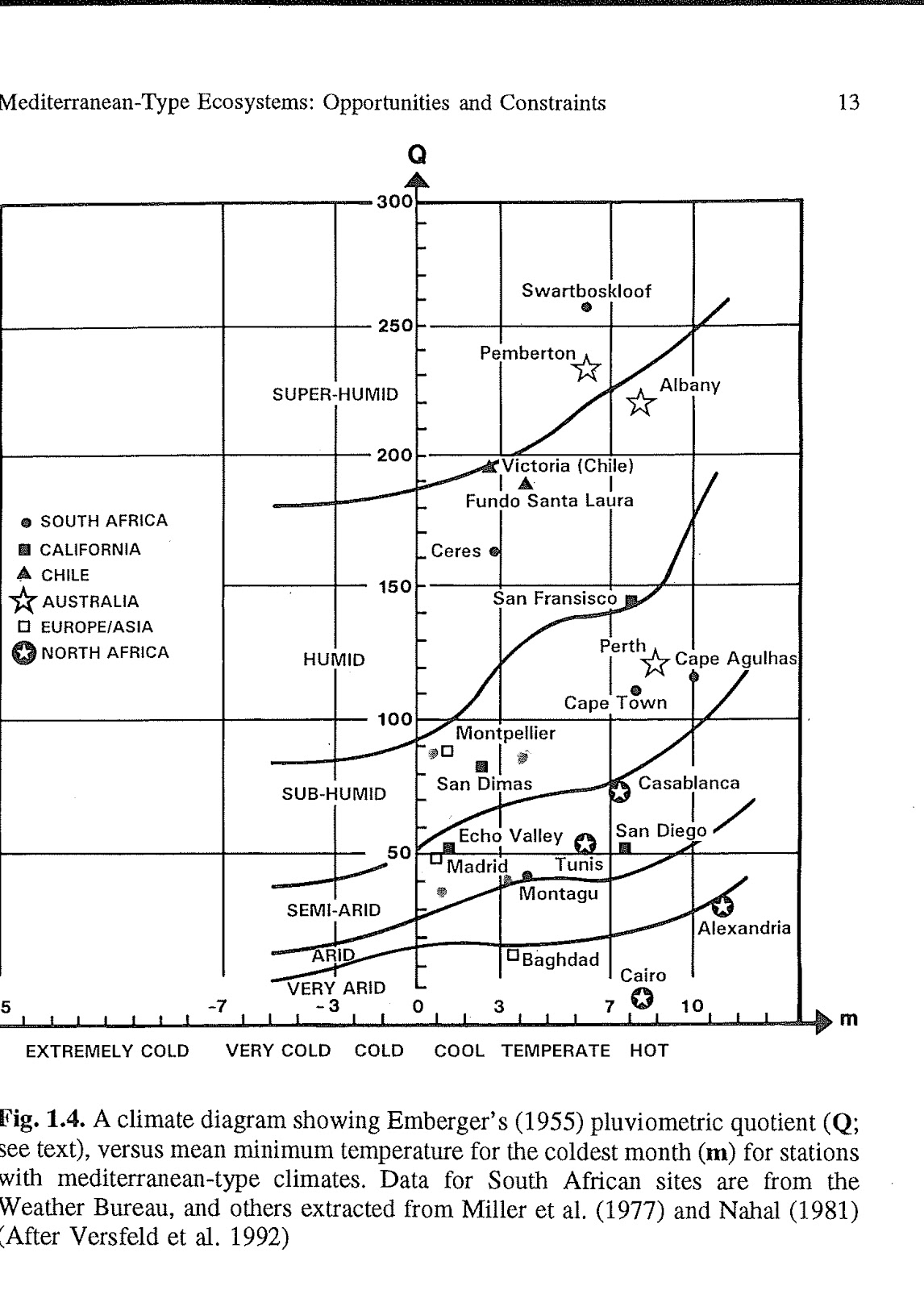 Thanks to Eric Garnier, for finding and sharing the original Emberger diagram and the more recent versions.
Posted by Caroline Tucker at 1/13/2017 04:39:00 AM 2 comments: Links to this post