Sometimes I find myself defending the value of microcosms and model organisms for ecological research. Research systems do not always have to involve a perfect mimicry of nature to provide useful information. A new paper in Evolution is a great example of how microcosms provide information that may not be accessible in any other system, making them a valuable tool in ecological research.

For example, macroevolutionary hypotheses are generally only testable using observational data. They suffer from the obvious problem that they generally relate to processes of speciation and extinction that occurred millions of years ago. The exception is the case of short generation, fast evolving microcosms, in which experimental macroevolution is actually possible. Which makes them really cool :-) In a new paper, Jiaqui Tan, Xian Yang and Lin Jiang showing that “Species ecological similarity modulates the importance of colonization history for adaptive radiation”. The question of how ecological factors such as competition and predation impact evolutionary processes such as the rapid diversification of a lineage (adaptive radiation) is an important one, but generally difficult to address (Nuismer & Harmon, 2015; Gillespie, 2004). Species that arrive to a new site will experience particular abiotic and biotic conditions that in turn may alter the likelihood that adaptive radiation will occur. Potentially, arriving early—before competitors are present—could maximize opportunities for usage of niche space and so allow adaptive radiation. Arriving later, once competitors are established, might suppress adaptive radiation.

More realistically, arrival order will interact with resident composition, and so the effects of arriving earlier or later are modified by the identities of the other species present in a site. After all, competitors may use similar resources, and compete less, or have greater resource usage and so compete more. Although hypotheses regarding adaptive radiation are often phrased in terms of a vague ‘niche space’, they might better be phrased in terms of niche differences and fitness differences. Under such a framework, simply having species present or not present at a site does not provide information about the amount of niche overlap. Using coexistence theory, Tan et al. produced a set of hypotheses predicting when adaptive radiation should be expected, given the biotic composition of the site (Figure below). In particular, they predicted that colonization history (order of arrival) would be less important in cases where species present interacted very little. Equally, when species had large fitness differences, they predicted that one species would suppress the other, and the order in which they arrived would be immaterial. ­

The authors tested this using a bacterial microcosm with 6 bacterial competitors and a focal species – Pseudomonas fluorescens SBW25. SBW25 is known for its rapid evolution, which can produce genetically distinct phenotypes. Microcosm patches contained 2 species, SBW25 and one competitor species, and their order of arrival was varied. After 12 days, the phenotypic richness of SBW25 was measured in all replicates.
Both order of arrival and the identity of the competitor did indeed matter as predictors of final phenotypic richness (i.e. adaptive radiation) of SBW25. Further, these two variables interacted to significantly. Arrival order was most important when the 2 species were strong competitors (similar niche and fitness differences), in which case late arrival of SBW25 suppressed its radiation. On the other hand, when species interact weakly, arrival order had little affect on radiation. The effect of different interactions were not entirely simple, but particularly interesting to me was that fitness differences, rather than niche differences, often had important effects (see Figure below). The move away from considering the adaptive radiation hypothesis in terms of niche space, and restating it more precisely, here allowed important insights into the underlying mechanisms. Especially as researchers are developing more complex models of macroevolution, which incorporate factors such as evolution, having this kind of data available to inform them is really important.
Posted by Caroline Tucker at 5/19/2017 05:11:00 AM No comments:

Problems with over-generalizing the dynamics of communities

Community ecologists talk about communities as experiencing particular processes in a rather general way. We fall into rather Clementsian language, asking whether environmental filtering dominates a community or if biotic interactions are disproportionately strong. This is in contrast to the typical theoretical focus on pairwise interactions, as it acts as though all species in a community are responding similarly to similar processes.

Some approaches to community ecology have eschewed this generality, particularly those that focus on ecological ‘strategies’ differentiating between species. For example, Grimes argued that species in a community represented a tradeoff between three potential strategies - competitive, stress-tolerant, and ruderal (CRS). Other related work describes rarity as the outcome of very strong density-dependence. The core-transient approach to understanding communities differentiates between core species, which have deterministic dynamics tied to the mean local environment, in contrast to transient species which are decoupled from local environmental conditions and have dynamics are driven by stochastic events (immigration, environmental fluctuations, source-sink dynamics). Assuming environmental stationarity, core species will have predictable and consistent abundances through time, in comparison to transient species.

If species do respond differently to different processes, then attempting to analyse all members of a community in the same way and in relation to the same processes will be less informative. Tests for environment-trait relationships to understand community composition will be weaker, since the species present in a community do not equally reflect the environmental conditions. In “A core-transient framework for trait-based community ecology: an example from a tropical tree seedling community”, Umana et al (2017) ask whether differentiating between core and transient species can improve trait-based analyses. They analyse tropical forest communities in Yunnan, China, predicting that core species "will have strong trait–environment relationships that increase the growth rates and probability of survival that will lead to greater reproductive success, population persistence and abundance".


The data for this test came from 218 1 m2 seedling plots, which differed in soil and light availability. The authors estimated the performance of individual seedlings in terms of relative growth rate (RGR). They also gathered eight traits related to biomass accumulation, and stem, root and leaf organ characteristics. They were particularly interested in how the RGR of any individual seedling differed from the mean expectation for their species. Did this RGR deviation relate to environmental differences between sites?  If a species’ presence is strongly influenced by the environment, then RGR deviation should vary predictably based on environmental conditions.

They then modelled RGR deviation as a function of the traits or environmental conditions (PCA axes). They considered various approaches for binning species based on commonness vs. rarity, but the general result was that bins containing rarer species had fewer PCA axes significantly associated with their RGR deviation and/or those relationships were weaker (e.g. see Figure below). 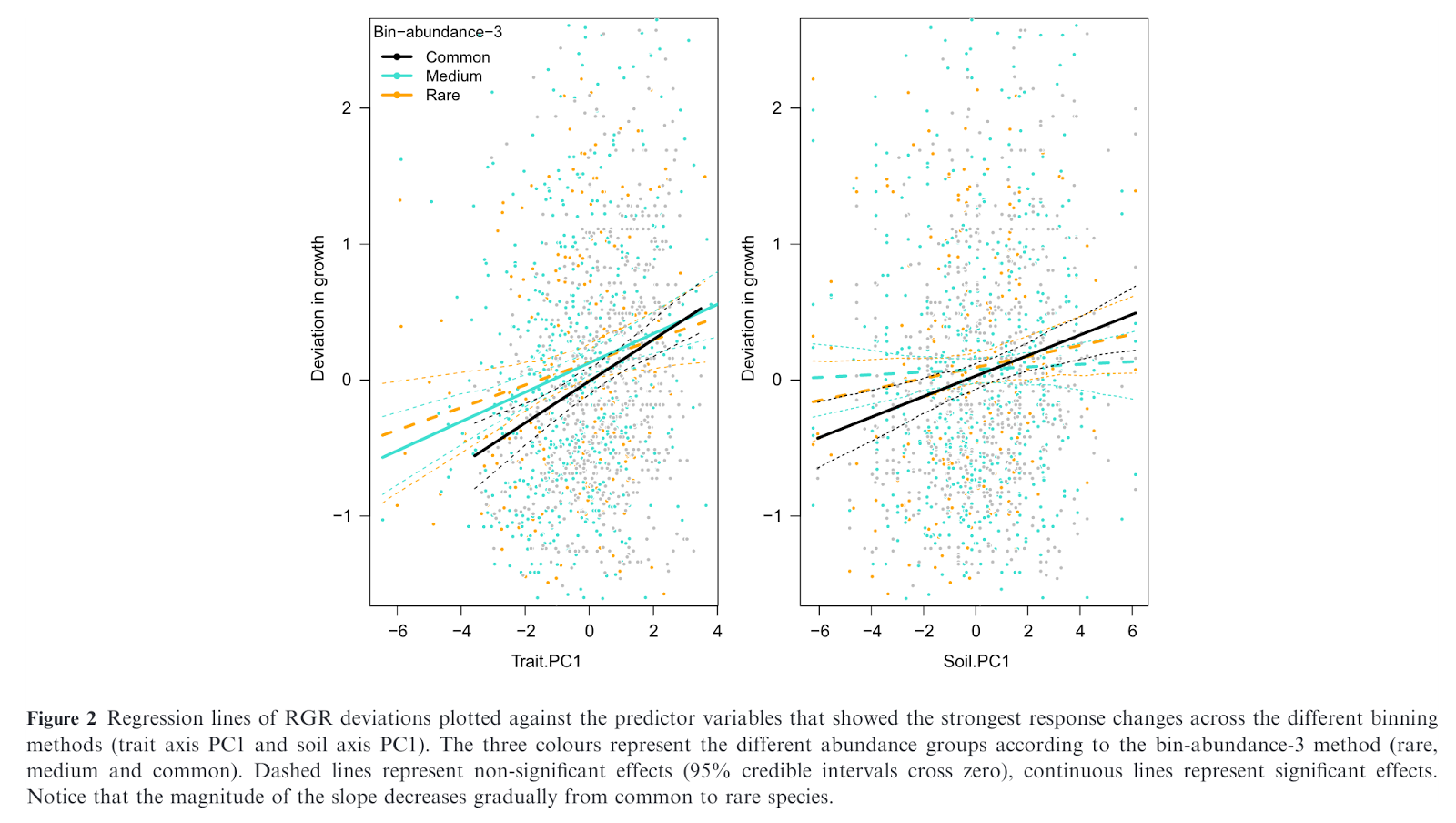 They conclude  that “the main results of our study show that the strength of demography-environment/trait and trait-environment relationships is not consistent across species in a community and the strength of these effects is related to abundance”. Note that other studies similarly find variation in the apparent mechanism of coexistence in communities. For example, Kraft et al. 2015  found that local fitness and niche differences only predict coexistence for a fraction of species co-occurring in their sites.

Umana et al.'s result is a reminder that work looking for general processes at the community level may be misleading. It isn't clear that there is a good reason to divide species into only two categories (e.g. core versus transients): like unhappy families, transient species may each be transient in their own way.
Posted by Caroline Tucker at 5/08/2017 05:08:00 AM 2 comments: