How long does it take for an ecosystem to recover?

Numerous human activities, such as logging, fishing, pollution and the introduction of exotic species negatively impact ecosystems around the world. These negative impacts mean ecosystems lose species diversity, biomass production, carbon storage, and nutrient uptake. An important question is, how long does it take for ecosystems to recover from perturbations. The answer to this question can inform conservation policy and strategies and could help focus management resources.

In a recent PLoS ONE paper, Jones and Schmitz attempt to answer this question by reviewing 240 published studies that examine post-disturbance ecosystem diversity and function. While they report that many ecosystems recover on the order of decades and that this is likely more rapid than previously thought, there are some important caveats. First, is that only about half of the 240 studies report a recovered state and either they were not carried out long enough or there are certain types of disturbances or systems where recovery takes much longer. Second is that there are important differences among habitat types. For example benthic algal recovery to hurricanes or oil spills may take 2-10 years, while the recovery of tree diversity to logging may take 20 to 100 years (or more). Thirdly, different measures of ecosystems general resulted in differing recovery times. For example, bird populations may recover quite quickly to logging (likely because they are migratory), whereas soil microbial communities and processes may take many decades due to changes in the soil environment. Finally, the nature of the disturbance can be an important determinant of time to recovery. Logging and agriculture require the greatest recovery time, while large storms and oil spills appear to require relative little time.

While these results may give us a general picture of ecosystem recovery, the data they use highlight the importance of knowing how disturbance type affect recovery and how different ecosystem measures can alter recovery time estimates.

Fire and the changing world

This is probably the most appropriate blog I have ever written. My family and I were evacuated two weeks ago because of the Jesusita fire in Santa Barbara, and several homes in our neighborhood were lost. Here in Santa Barbara we have experienced multiple years of extremely large fires, with this last one occurring much earlier than previous fires.

Wildfires have been a part of the Earth’s biota likely since organisms first died and dried on land. Ecosystems have been shaped by fire, numerous organisms have evolved strategies to cope with fire and human cultural development has close tied to fire. In a recent review paper in Science by David Bowman, Jennifer Balch and colleagues, they asked the question: how have fires changed and what does the future look like? Human activities are changing fire patterns and climate change may be entering a feedback with fire. Global warming has been linked to increases in extreme fire weather, making large, destructive fires more probable. However, these large fires feedback into this loop because they release compounds that have strong greenhouse effects. Further, smoke plumes inhibit cloud formation, reinforcing the dry conditions that lead to the fires in the first place.

They argue that fire needs to be incorporating into models of climate change and especially those that link ecosystem properties climate change. Fire may change the distribution of specific habitat types beyond that predicting by responses to climate change alone.

It's not me, It's you: self recognition and plant responses to herbivory 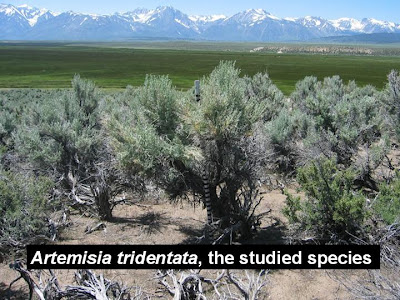 Many multicellular organisms have the ability to distinguish self and non-self. This is clear in animals, but is not so well documented in plants. A recent experiment published in Ecology Letters by Karban and Shiojiri clearly demonstrate that self recognition in plants can affect their response against herbivores. This very elegant experiment compared herbivory rates of plants growing near clipped clones of the same plants (themselves), and clipped individuals of non-self plants. Clipping is a standard way to mimic herbivory; plants grew in pots so they couldn’t communicate via roots and they did not touch each other. They found that plants that grew by a clipped clone had 42% less herbivory than plants growing by a non-clone. This is strong evidence that plants growing near clones (themselves) responded more effectively to volatiles cues compared to plants growing near a genetically different individuals. This study sheds light on the effects of communication among plants, which is clearly a topic that needs to be more explored, and that could be crucial to understand some ecological and evolutionary processes.
Karban, R., & Shiojiri, K. (2009). Self-recognition affects plant communication and defense Ecology Letters, 12 (6), 502-506 DOI: 10.1111/j.1461-0248.2009.01313.x
Posted by Martin Nuñez at 5/18/2009 04:00:00 PM No comments: Links to this post

In a large-scale study published this week in Proceedings of the National Academy of Sciences, Hongcheng Zeng and colleagues show that hurricane damage can diminish a forest’s ability to absorb carbon dioxide from the atmosphere. Their results suggest that an increase in hurricane frequency due to global warming may further amplify global warming.

The annual amount of carbon dioxide a forest absorbs from the atmosphere is determined by the ratio of tree growth to tree mortality each year. When hurricanes cause extensive tree mortality, not only are there fewer trees in the forest to absorb greenhouse gases, but these tree die-offs also emit carbon dioxide, thus potentially warming the climate.

Using field measurements, satellite image analyses, and empirical models to evaluate forest and carbon cycle impacts of hurricanes, the researchers established that an average of 97 million trees have been affected each year for the past 150 years over the continental United States, resulting in a 53-million ton annual biomass loss and an average carbon release of 25 million tons per year. Over the period of 1980–1990, released CO2 potentially offset carbon absorption by forest trees by 9–18% over the entire United States. Impacts on forests were primarily located in Gulf Coast areas such as southern Texas, Louisiana, and Florida, but significant impacts also occurred in eastern North Carolina.

These results have important implications for evaluating positive feedback loops between global warming and environmental change. 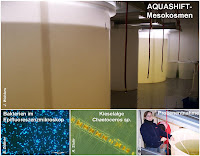 Biological activity in the world open ocean’s surface is characterized by autotrophic and by heterotrophic processes. Phytoplankton organisms take up dissolved CO2 (dissolved inorganic carbon, DIC) and together with other inorganic nutrients and light they produce biomass (particulate organic carbon, POC) and dissolved organic carbon (DOC). By these processes marine phytoplankton is responsible for approximately half of the worlds primary production. These two carbon compounds (POC and DOC) either sink down to the deep ocean (which is basically the biological carbon pump) or they are consumed by other trophic levels. One important part of the planktonic food web is the microbial community which consists of bacteria (smaller than 3 µm), auto- and heterotrophic flagellates and other protists (larger than three µm). This community takes up both POC and DOC and by respiration recycles these carbon compounds back into DIC. Thus in terms of carbon flux the microbial community potentially competes with the biological carbon pump.
In a mesocosm experiment with natural marine plankton Julia Wohlers and her colleagues manipulated future ocean surface warming and measured the carbon flux during the plankton bloom peak. Whereas in this experiment phytoplankton biomass production (POC of autotrophs) was not affected by warming the authors found that respiration by the microbial community, in particular by organism larger than 3 µm, significantly increased. This increase in respiration led to a significant decrease in net DIC reduction in the whole planktonic foodweb. The results are a potential sign for future declining carbon sequestration by biological processes in the world oceans.

To paraphrase Thomas Henry Huxley: How stupid of us not to have thought of that!

In what has to be one of the most elegant and simple experiments I've seen in a long time, Yann Hautier, Pascal Niklaus and Andy Hector tested a basic mechanism of why nutrient enrichment results in species loss. This is a critically important issue as it has been repeatedly shown that while adding nitrogen to plant communities causes increases in productivity, species go locally extinct. We may bare witness to local diversity declines because human activity has greatly increased nutrient deposition. This pattern has been observed for a couple of decades, but the exact mechanism has never been adequately tested, with some camps believing that enrichment increases below-ground competition for other resources that become limiting, or above ground for light.

As reveled in the most recent issue of Science, Hautier et al. performed an exceedingly simple experiment; they added light to the understory of plant communities with or without nitrogen additions. They made two compelling observations. First, when communities were enriched without elevated light, they lost about 3 of the 6 initial species compared to the control, while light addition in the enriched communities maintained the 6 member community (as did a light only treatment). The second result was that the light plus nitrogen treatment obtained much higher biomass than either the nitrogen or light only treatments, and in fact the light only treatment did not significantly increase productivity, meaning that the communities are not normally light-limited. Further, they failed to detect any elevated belowground competition for other resources.