Something often happens to mature community ecology studies as they get older that we don’t like to talk about much. Occasionally, when biodiversity and ecosystem functioning experiments are performed in a controlled, homogeneous setting, they can suffer from flaccid response curves. It’s perfectly normal, happens to lots of healthy microcosm communities, but it can be troubling and embarrassing nonetheless. After all, who doesn’t want a nice stiff linear response curve?
Bear with me here for a minute.

A few weeks ago, Bradley Cardinale published a study in which he tested the effects of algal biodiversity on water quality in streams. It’s a pretty classic diversity-function experiment; lots of artificial streams with different numbers of species of algae in them, and he measured productivity and nitrogen uptake. As is usually the case, the more species he put in each stream, the more these ecosystem functions increased.

But Cardinale did something else in this experiment that has never been done before, at least not on this scale. He added extra niche opportunities to some of the streams, so that they offered multiple different habitats for algae. He did this by introducing heterogeneity through flow and disturbance manipulations. 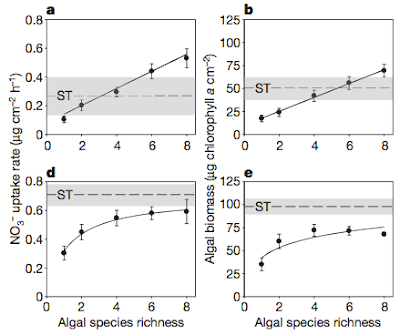 Figures from Cardinale 2011, Nature. a and b are the heterogeneous streams, d and e are the homogeneous ones.

Well when Cardinale threw those extra habitats into his artificial streams, that floppy old saturating curve sprang up like a regressional jack-in-the-box (figures a and b).

What happened was the homogeneous streams became dominated by just a single species that was well adapted to that environment. The heterogeneous streams allowed different species to coexist and this let them make more efficient use of the resources in those streams.

This is a major finding for a few reasons. First, it confirms that one of the main mechanisms behind diversity-function relationships is niche partitioning. I’ve said in the past that knowledge of these mechanisms is sorely needed. Second, it links coexistence theory to ecosystem functioning, two fields that are closely related but often disconnected.

Finally, it means that biodiversity is even more valuable than we had previously thought. The natural world doesn’t contain very many homogeneous streams; it’s a complicated place. The real world is probably better represented by figures a and b than by figures d and e. So while controlled experiments have shown that some species are redundant for ecosystem functioning, there is no evidence here for any redundancy in more natural settings.

This paper also underlines the fact that these studies need to be done in nature as opposed to labs. Cardinale was able to simulate nature fairly realistically because he was using algae. That’s harder to do with more complex organisms. It’s difficult to recreate environmental heterogeneity in artificial ecosystems, and if ecosystem functioning depends on both biodiversity and heterogeneity, then it’s time to take this research outside. Manipulative field studies are a good start, but completely natural settings will probably reveal more of the true story.

So although it’s very common for artificial communities to suffer from Ecological Dysfunction, there is no reason that they can’t enjoy a healthy relationship with biodiversity like any other community. All they need is a little heterogeneity to spice things up and put that spring back in their step.

Andy Hector has written an excellent perspective on the study. I recommend reading it, particularly if you don’t want to read the entire original article.

A diversity of voices is why the internet is such a powerful intellectually democratizing form of communication. Ecology blogs, long the minority in scientific blogging just received an immense boost from the new Oikos blog, obviously associated with the journal, Oikos. While some of their content is dedicated to journal business, there have been great posts on ecological research and broader intellectual topics from Jeremy Fox, aka oikosjeremy.

Rosindell, Hubbell, and Etienne. (2011). The unified neutral theory of biodiversity and biogeography at age ten. 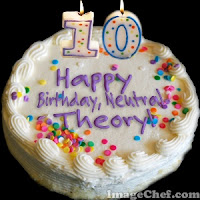 I would argue that neutral theory is not only the most controversial idea, but also the most successful idea to permeate community ecology in the last ten years. A quick keyword search suggests that ~30 ecological papers related to the topic were published in the last year, including some with titles still reflecting the controversy; “Different but equal: the implausible assumption at the heart of neutral theory”. Neutral theory makes a seemingly unreasonable assumption—that species identity doesn’t matter—and yet seems to predict species-area relationships and species abundance distributions as well or better than niche theory does. This made it an infuriating challenge for many ecologists. The number and quality of papers that it inspired—both in support and opposition—are a reminder that disagreement is good for science.

It’s been a decade since the publication of “The Unified Neutral Theory of Biodiversity and Biogeography”, in which Steve Hubbell proposed a controversial model in which coexistence results from drift, dispersal and speciation, rather than ecological differences between species. To mark this anniversary, a review in TREE by James Rosindell, Stephen Hubbell, and Rampal Etienne reflects on neutral theory’s first ten years, and examine the influence neutral theory has had in many areas of community ecology. The authors also note that some of the limitations of neutral theory can be dealt with by extending the classic formulation of the model, so that unrealistic assumptions related to spatial structure, speciation rates, or the zero-sum assumption can be relaxed. The excessive interest in neutral theory’s species-abundance predictions left its other predictions unexamined, and there is still room for tests of how neutral theory informs species-time relationships, modes of speciation, and even conservation decisions.

Despite these accomplishments, the review is remarkably subdued, underlined by statements such as neutral theory is a “good starting point”, a “valuable null model”, and a “useful baseline”. However, it seems unnecessary to state, as some have, that "neutral theory is dead". Its legacy, captured in the final paragraphs, is still incredibly important: “…niches have dominated our attention and left less obvious, but still important processes forgotten… Perhaps the most important contribution of neutral theory has been to highlight the key roles of dispersal limitation, speciation and ecological drift, by showing how much can be explained by these processes alone...”

The 35th installment of the Carnival of Evolution is available from Lab Rat. Want to know who said what about evolution? Go to the Carnival.
Posted by Marc Cadotte at 5/02/2011 03:05:00 PM No comments: Links to this post