I’ve been fascinated by creationism since I first moved to Tennessee over twelve years ago –home of the Scopes “monkey” trial. And though I’ve been away from Tennessee for about seven years now, creationism still fascinates me. I find it interesting not because their arguments are persuasive or scientifically credible –they’re absolutely not; but rather my interest in it is as a social or maybe psychological phenomenon. Why, in the light of so much compelling evidence, do otherwise intelligent people hold on to something that contradicts the record of life that surrounds us. I’m a biologist because I find the tapestry of life full of wonder and richness, with an amazing story to tell.

But what fascinates me most of all are trained scientists, who hold legitimate PhDs, who take up the cause of creationism. This is interesting from two angles –first the ‘scientists’ (more on them later), and second the organizations that support and fund their operations. Creationist organizations readily adopt and promote these scientist-turned-creationists, even though they routinely belittle and try to undermine working scientists. Its like the Republican party that dismisses the Hollywood elite as not real Americans, but proudly flaunting Chuck Norris or Clint Eastwood. When the PhDs are on the side of creationism, they are great scholars with meaningful expertise, and when they are against creationism (as are 99% of working scientists) they are elitist and part of a conspiracy.

Enter the latest parade of creationist scientists, who’s authority is meant to persuade the public, at a  ‘Origin Summit’ at Michigan State University in a few days. The first thing you see are four bespectacled PhDs, who are authoritized by the fact that they are PhD ‘scientists’. They are: Gerald Bergman, Donald DeYoung, Charles Jackson, and John Sanford. But, unfortunately for them, not all scientists are created equally. 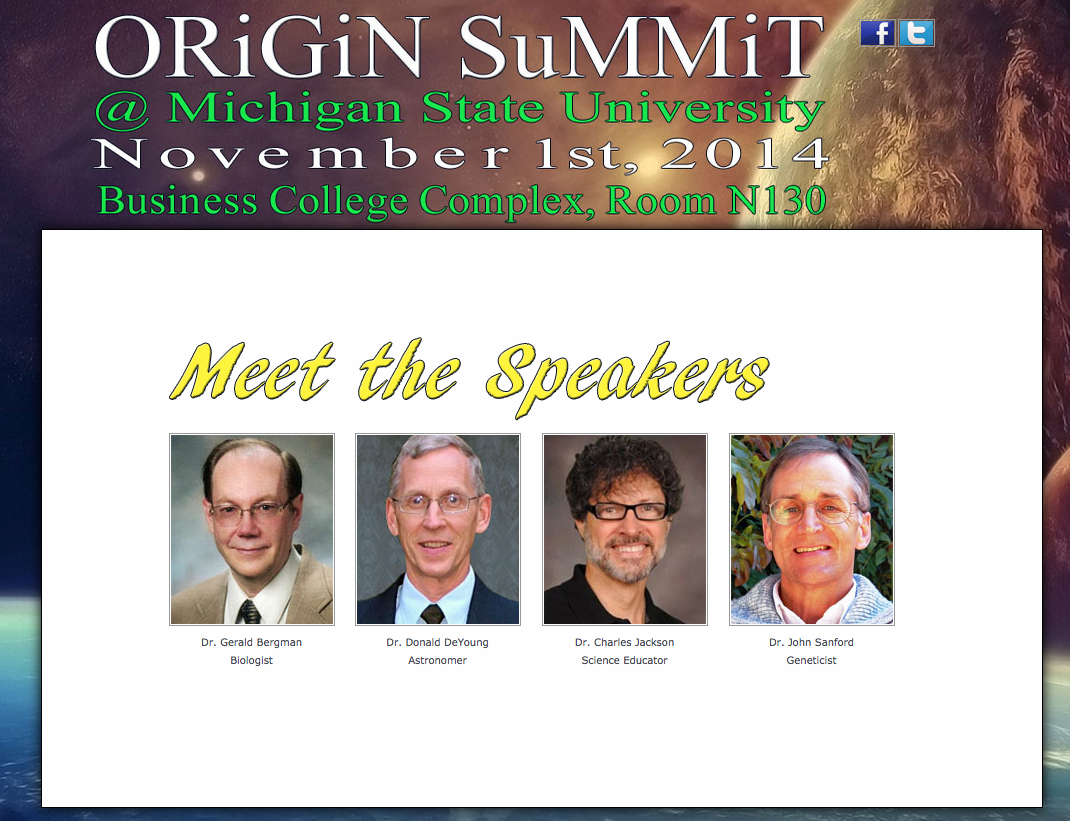 What makes a scientist? That is not easily answered, but education is one element –and having a PhD from a recognized program and University is a good start. But being trained is not enough, there needs to be some sort of evaluation by the broader scientific community. First and foremost, a scientist needs to communicate their research findings to other scientists by publishing papers in PEER-REVIEWED academic publications. Peer-reviewed means that experts on the topic with examine your paper closely, especially the experimental design and analysis, a provide criticisms. All papers are criticized at this stage, but those with especially egregious problems will not be published. Scientists are also evaluated by other scientists when applying for research funds, being considered for promotion (for example, your record and papers should be sent to 5-8 scientists so they can evaluate the meaningfulness of your contributions), or being considered for scientific awards.

Table 1: How to know that you are doing science.

So then, the ability to publish and survive scrutiny is paramount to being a successful scientist. Of course someone who subscribes to science as conspiracy will say: “wait, then scientists control who gets to be a scientists, and so those with new or controversial ideas will be kept out of the club”. The next thing to understand is what makes a scientist “famous” within the scientific community. The most famous scientists of all time have overturned scientific orthodoxy –that is the scientists that were trailblazers and who came up with better explanations of nature. Many scientists appreciate new ideas and new theories, but work on these has to be scientifically robust in terms of methodology and analysis.

Now back to our Origin Summit scientists, how do they compare to normal expectations for a successful scientist? We will use the average expectations for an academic scientist to get tenure as our benchmark (Table 1). First, Gerald Bergman –biologist. He has a staggering number of degrees, some from legitimate institutions (e.g., Wayne State University), and some from unaccredited places with dubious legal standing (e.g., Columbia Pacific University). He had a real faculty position at Bowling Green University but was denied tenure in 1979. He claims that he was fired because of his anti-evolution religious beliefs (his claim –which to me says his creationism cannot be science). He went to court, and long-story-short he lost because he misrepresented his PhD to get a job in the first place. More importantly to our story here is, what was his record? Fortunately for us, scientific publications, like the fossil record, accurately reflect historical events. Looking through scholarly search engines for the period of time between 1976-1980 (when he would be making a case for tenure) I could only find one publication credited to G.R. Bergman, and it appears to be a published version of his dissertation on reducing recidivism among criminal offenders. Published theses are seldom peer reviewed, and this is certainly not biology. He does not meet our basic expectations for the scientific authority he is promoted as. 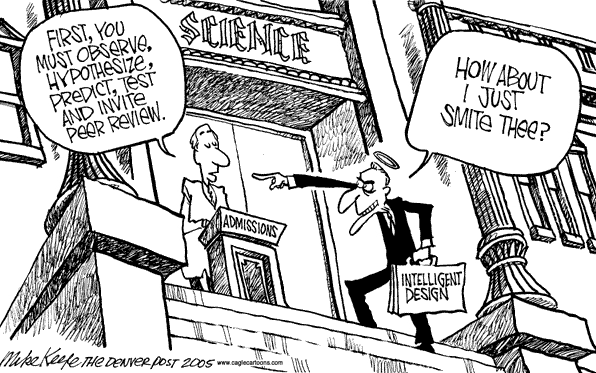 Next, is Donald DeYoung –astronomer. He is a professor in the Department of Science and Mathematics at Grace College, and Christian post-secondary institution. It has some accreditation, especially for some programs such as counselling and business. Its not fully accredited, but it seems to be a legitimate Christian school. I searched for legitimate peer-reviewed publications, which was tricky because there also exists another D. B. DeYoung, also on the math/astronomy side of the business. If we ignore his non-peer reviewed books, there may be only one legitimate publication from 1975 in the Journal of Chemical Physics, looking at a particular iron isotope –nothing to do with the age of the Earth or evolution. One paper, so he does not meet our expectations.

Third is Charles Jackson with a PhD in education. There is nothing meaningful on this guy to suggest he is a scientist by any stretch of the imagination. Next.

Finally, we have John Sanford, a geneticist. Now we are getting somewhere! How can a person who studies the basic building blocks of life, deny its role in shaping life? He is a plant breeder and was in an experimental agriculture station associated with Cornell University. I found about a dozen real papers published in scientific journals from his pre-tenure time. None are actually on evolution; they seem to be largely about pollen fertilization and transfer, and production of crops. His publications definitely changed later in his tenure, from basic plant breeding to creationist works. Most interestingly, he has a paper on a computer simulator called Mendel’s Accountant, published in 2007, that simulates genetic mutation and population fitness –the basic stuff of evolution, but which can presumably be used to support his theories about mutations causing ‘devolution’ and not the fuel for real evolution. I read the paper. The genetic theory underpinning is not in line with modern theory, and this is further evidenced by the scant referencing of the rich genetics literature. Most of the models and assumptions seem to be made de novo, to suit the simulation platform, instead of the simulator fitting what is actually understood about genetic mechanisms. I assume this is why the paper is not published in a genetics journal, but rather a computer science one, and one that is not listed in the main scientific indexing services (often how we judge a journal to be legitimate). Regardless, of the scientific specifics, Sanford is a legitimate scientist, and he is the one person I would love to ask deep questions about his understanding of the material he talks about.

The one thing to remember is that a PhD does not make one an expert in everything. I have a PhD in ecology and evolution, but I am not competent in basic physiology for example, and would/should not present myself as an authority to a broader public who may not know the difference between phylogeney and physiology.

So, at the end of the day, here is another creationist conference with a panel of scientific experts. One of the four actually deserves to be called that, and even then, he is likely to be talking about material he has not actually published on or researched. There is a reason why creationist organizations have a tough time getting real scientists on board, and instead are relegated to using mostly failed hacks, because there isn’t a scientific underpinning to creationist claims.
Posted by Marc Cadotte at 10/30/2014 10:13:00 PM

I think the issue is a lot simpler than your detailed anlysis, and you mention the key point in your first paragraph: You are a biologist because you "...find the tapestry of life full of wonder and richness, with an amazing story to tell". When i talk to creation "scientists" or read their books (even the likes of Ken Miller and Francis Collins) what i find is NOT an openended wonder and curiousity about the physical universe around them, nor even particularly a LOVE for it. What i find is a wonder and love for their religion, their father god, or at least (let us say in Collins' case, a desire to help people with scientific technology. And then there is the realization after reading what they write, that thye are just trying to prove a point and not go on an openended exploration. It's pretty easy to spot.

Hell you don't even find a curiousity to go on an openeded exploration of creation science, i.e. ok, God created this world and life in it. lets do experiments, what is god like? what kind of tools did he use? what were his motives? 600,000 species of beetles? bats? MOSQUITOS?

Recall Ken Miller's "finding darwins god" or something like that. he finally comes out that god did it though using evolution and quantum indeterminacy and even mentions jesus and mary in obscure spots,

They are just playing a dirty boring game. WHY, that's the question.