There is now ample evidence that warming temperatures cause advances in the timing of organismal activity (i.e., phenology). Studies have shown that rising temperatures are responsible for earlier plant leafing and flowering (Miller-Rushing & Primack 2008, Wolkovich et al. 2012), pest insect emergence and abundance (Willis et al. 2008), and even local species loss and reduced diversity (Willis et al. 2008). One emerging expectation from global warming studies is that insects should emerge earlier since winters are milder and spring temperatures are warmer. This expectation should hold so long as high temperatures or other environmental stressors don’t adversely affect the insects. And the concern about shifts in emergence and insect activity is the potential for mismatches between plant flowering and the availability of pollinators (Willmer 2012) –if insects emerge too soon, they may miss the flowers. 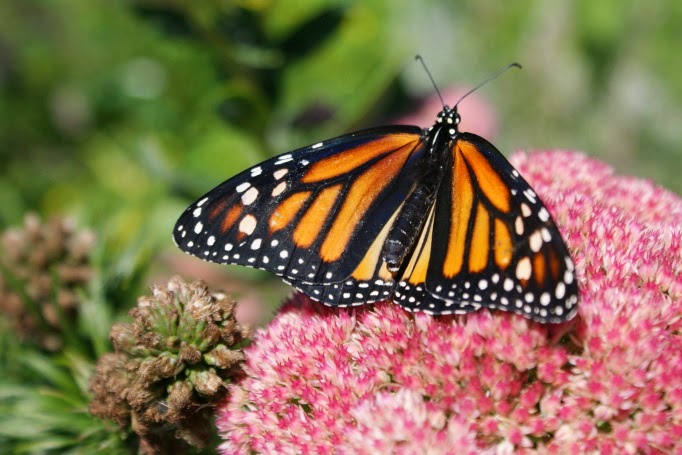 In a forthcoming paper in Ecology by Sarah Diamond and colleagues study 20 common butterfly species across more than 80 sites in Ohio. These sites were located in a range of places across a rural to urban gradient. Instead of finding earlier emergence in warmer places, which were typically urban areas, they found that a number of species were delayed in warmer urban areas. Even though the butterflies might emerge earlier in warmer rural habitats, they were adversely affected in urbanized areas.

These results highlight the need to consider multiple sources of stress from different types of environmental change. Observations from a few locales or from controlled experiments may not lead to conclusions about interactive influences or warming and urbanization, and that's why this study is so important. It observes a counter-intuitive result because of the influence of multiple stressors.

A next step should be to determine if pollinator-plant interactions are being disrupted in these urban areas. The reason why we should care so much about pollinator emergence is that they provide a key ecological service by pollinator wild, garden, and agricultural plants, as well has being an important food source to other species. A mismatch in timing and disrupt these important interactions.

Can you teach an old bird new (migratory) tricks?

Phenological responses have been used as one of the major indicators of climate change. The timing of flowering and fruiting, the return of migrant birds and insects from winter habitats are easily and often measured, and records going back decades or centuries sometimes exist. Most importantly, shifts in phenological indicators are some of the strongest connections between rising temperatures and biological and ecological responses (for example). There is plenty of evidence, for example, that some migrant bird species are returning to their breeding grounds earlier than ever. These migratory birds may be responding (via migration timing) to warming temperatures in several ways: there may be plasticity or flexibility in individual timing of migration which allows them to respond to changing temperature cues; or species may also show adaptation via changes in the frequency of individuals with different migratory timings (microevolution). In cases where migratory species are responding to climate change, distinguishing the mechanisms allowing them to do so is surprisingly hard. Early arrival of migratory bird species is often explained as being due to individual plasticity or flexibility in “choosing” the date of migration, but the majority of studies of this phenomenon include little or no information about individual behaviour, only changes in the mean date of arrival for the entire population.

For this reason, Gill et al. looked at individual, rather than average population, arrival dates for Icelandic black-tailed godwits in south Iceland. Icelandic black-tailed godwits (“godwits” for the sake of brevity) have shown significant advances in the last 20 years in the timing of their spring arrival to the shores of Iceland, and these advances appear to relate to increasing temperatures. The population has also been banded such that 1-2% can be individually identified and tracked throughout their migratory range. Although only adults (of unknown age) were banded at the start of the experiment in 1999, recently chicks have also been banded and released and so a wide range of demographic classes are included with the banded birds.

When Gill et al. looked at date of arrival across 14 years for each individual, their results were surprisingly clear and cohesive. As previously reported, the population mean date of arrival in South Iceland had advanced as much as 2 weeks. But, this advance is not reflected in individual timing of arrivals over that same period – if a bird tends to arrive on a given day, they will continue to arrive on approximately that day every year, independent of temperature conditions. Instead, the population trend appears to be driven entirely by birds born in recent years – young individuals (recently hatched) tend to have arrival dates much earlier than older individuals. At least for the godwits, population wide trends in migration dates are actually driven by only a subset of the individuals.

Often it is assumed that migratory birds are responding to warming temperatures on an individual level: individuals respond to changing cues, resulting in shifts in arrival date. This study suggests otherwise, and finds that the important mechanism is not individual plasticity or microevolution but rather related to demographic shifts in arrival time. As to why younger birds arrive earlier, it is not clear, but may relate to the observation that nest building and hatching dates are also advancing. It may be that natal conditions are important – the authors observed a variety of possibly inter-related changes such that hatching dates are advancing and chick sizes are increasing, and the suggestion that mortality rates of later arriving individuals may also be higher. "Environmentally induced advances in arrival dates of recruits could operate through: (i) carry-over effects of changing natal conditions, (ii) changing patterns of mortality of individuals with differing arrival times, or (iii) arrival times being initially determined by conditions in the year of recruitment and individuals repeating those timings thereafter."

These results make some predictions about which populations of migratory birds might have the most ability to respond to warming climate - most likely those with shorter migratory distances, shorter times to reproduction and shorter-lifespans (hence decreasing the lag-time required for the population to catch up to temperature). It may also have relevance for other non-bird species that also rely on careful timing between phenology and temperature. Correspondingly, it suggests limitations - if individual behaviour is so inflexible and constrained, our hopes that some species may respond to climate change with behavioural changes seem far to simplistic.
Posted by Caroline Tucker at 11/26/2013 12:21:00 PM No comments:

Timing is everything: global warming and the timing of species interactions

While an obvious affect of climate change will be changes in the distributions or range sizes of species, more insidious and likely more consequential will be how species interactions are affected by changes in the timing of growth and reproduction. These changes in an organism's life cycle, or phenology, can create mismatches between an organism's need and resource availability or the readiness of coevolved partners -such as plants and pollinators.

In an 'Idea and Perspective' paper in Ecology Letters, Louie Yang and Volker Rudolf set out a new framework to examine the effects of phenological shifts on species interactions. They argue that one cannot understand or predict the fitness consequences of a phenology shift without knowing how interacting species' phenologies are also influenced by environmental changes. The consequences of phenological shifts are changes in fitness, and the question is: how would one go about assessing the fitness effects of phenological changes on interactions? This is where this paper really hits its stride. Yang and Rudolf set out a new conceptual framework for studying the fitness consequences of phenological shifts. They make the case that an experimental approach is required to test the three likely scenarios. The first is that there are no changes in phenology -that is, measuring the fitness levels of the two interacting species under stable conditions. Second, you induce an experimental shift in the timing of one of the species. For example, in a plant-herbivore interaction, germinate the plant earlier and when the herbivore normally has access to the plant, the plant will be older. What are the fitness changes associated with this shift? Finally, you can shift the timing of the other species relative to the first. In our example, the herbivore has access to younger plants and again are there fitness consequences?

Yang and Rudolf call the full combination of possible fitness effects, across a number of timing mismatches, 'the ontogeny-phenology landscape'. By mapping fitness changes across this ontogeny-phenology landscape, researchers can offer better predictions, on top of just changes in range size or habitat use, about the possible affects of climate change. The obvious question, and Yang and Rudolf acknowledge this, is how to extend two-species ontogeny-phenology to multi-species communities. Of course, extending two-species interactions to communities is a question that plagues most of community ecology, but I think the solution is that researchers who know their systems often have intuition about the major players, and thus those species where phenology shifts should have disproportionate effects on other species. Such species could be the place to start. Another strategy would be a food web type approach, where species are lumped into broader trophic groups and we ask how shifts in certain trophic groups affect other groups.

Regardless of how to extend this framework to multispecies assemblages, I see this paper as likely to be very influential. It gives researches a new focus and framework, where specific predictions about climate change can be made.