In a time when most news about human impacts on the Earth's biodiversity seems to be negative, a new paper in Nature provides a glint of good news about our ability to change the current trend of loss. Encouraging new conservation efforts and funding may be contingent on providing evidence that such efforts will actually be effective.

The new report from Waldron et al. (2017) provides evidence for a predictable relationship between conservation spending and reduction of biodiversity loss. They focused on signatory countries of the Earth Summit's Convention on Biological Diversity and Sustainable Development Goals, and developed a pressures-and-conservation-impact’ (PACI) model to predict how biodiversity loss changed in these countries between 1996-2008. Improvements were driven by conservation spending (relativized to reflect differences in buying power between nations) and were counteracted by GDP growth and agricultural expansion.

Using this model, the authors could predict how the conservation investments made in these nations had affected their loss of biodiversity, as compared to the scenario in which no investment had been made. Amazingly, the median loss of biodiversity per nation was 29% lower than would otherwise have been expected. Over 1996-2008, seven countries even had net biodiversity improvements: Mauritius, Seychelles, Fiji, Samoa, Tonga, Poland and Ukraine.

They discuss a number of interactions among model terms that capture greater socio-economic complexity - for example, the impacts of GDP growth on biodiversity loss are lower when a country's base GDP is very low. Such large scale studies naturally face data limitations - here, they use mammal and bird Red List status changes to develop a quantitative measure of biodiversity loss. Other taxa presumably show similar trends, but we lack the data to incorporate them at this moment.

Hopefully by demonstrating this cost-benefit analysis for conservation actions, Waldron et al. (2017) encourage future 'investors' as to the payoff of spending on conservation.

Blogging about science for yourself

In case you missed it, a new paper in Royal Society Open Science from seven popular ecology blogs discusses the highlights and values of science community blogging. It provides some insights into the motivations behind posting and the reach and impacts that result. It's a must-read if you've considered or already have a blog about science.

It was nice to see how universal the 'pros' of blogging seem to be – the things I most appreciate about contributing to a blog are pretty similar to the things the authors here reported on too. According to the archives, I've been posting here since 2010, when I was a pretty naïve PhD student interacting with the ecological literature for the first time. I had a degree of enthusiasm and wonder upon interacting with ideas for the first time that I miss, actually. I just started a faculty job this fall, and I think that the blog allowed me to explore and experiment with ideas as I figured out where I was going as a scientist (which is still an ongoing process).

As Saunders et al. note, one of the other major upsides to blogging is the extent to which it produces networking and connections with colleagues. In a pretty crowded job market, I think it probably helped me, although only as a complement to the usual suspects (publications, 'fit', research plans, interviewing skills). Saunders et al. also mentioned blogging as relevant to NSF's Broader Impacts section, which I actually hadn't considered. Beyond that, the greatest benefit by far for me is that forcing oneself to post regularly and publicly is amazing practice for writing about science.

Despite these positives, I don't necessarily think a science blog is for everyone and there are definitely things to consider before jumping in to it. It can be hard to justify posting on a blog when your to-do list overflows, and not everyone will –understandably- think that's a good use of their time. There is a time commitment and degree of prioritisation required that is difficult. This is one reason that having co-bloggers can be a lifesaver. It is also true that while writing a blog is great practice, it probably selects for people able to write quickly (and perhaps without perfectionistic tendencies).

When students ask me about blogging, they often hint at concerns in sharing their ideas and writing. It can be really difficult to put your ideas and writing out there (why invite more judgement and criticism?) and this is can feedback with imposter syndrome (speaking from my own experience). For a long time, minorities, women, students have been under-represented in ecology blogs, and I think this may be a contributor to that. It's nice to see more women blogging about these days, and hopefully there is a positive feedback from increasing the visibility of under-represented groups.

In any case, this paper was especially timely for me, because I've been re-evaluating over the past few months about whether to keep blogging or not, and this provided a reminder of the positive impacts that are easy to overlook. 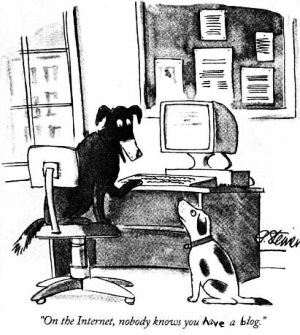